Given that the Patriots need to cut something like 40 players from their active roster before opening day, I figured it might make sense to make a single thread to contain those movements.

My favorite place to track player movements is spotrac.com. Here is the page where they keep the Patriots transactions:

Since July 30th, the Pats have waived then resigned OT Cole Croston, signed OT Martez Ivey and WR Cameron Meredith, signed Tom Brady to an “extension” that by all accounts is a salary cap maneuver, obtained TE Eric Saubert in a trade with Atlanta, waived QB/WR Danny Etling, and released WR Dontrelle Inman.

this will be an interesting roster, DB’s and WR’s aplenty, who makes it who gets the Turk’s call is going to be a chess match

They put an Atlanta Falcons logo next to Etling’s name.

I wonder if they plan to use him as a backup QB, or continue the WR experiment, or both.

As reported in another thread, long time punter Ryan Allen has been released.

I’m waiting for the day when Adam V retires lol. So old.

I’m waiting for the day when Adam V retires lol. So old.

Not as old as Blanda when he retired. 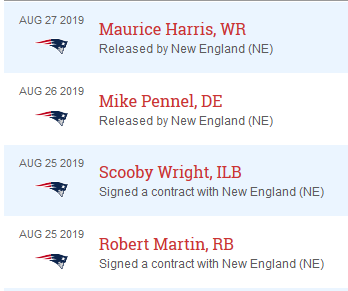 Pennel shocks me. I saw these great PFT ranks and thought we got a stud, I forgot the PFT ranking means absolutely shit in reality - it is just some asswipe giving his uneducated opinion.

Spotrac is showing that trade, too, along with another OL from Baltimore.

I thought we were short of Centers, not Tackles or Guards.

And the flood gates begin to open … 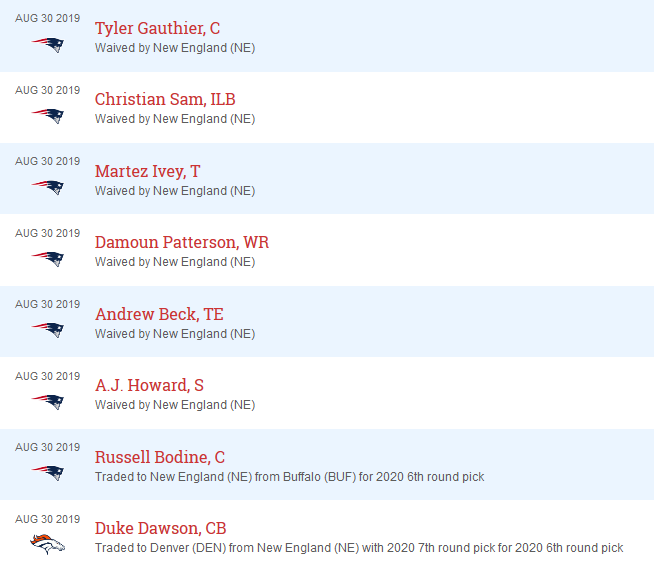 Edit: Looks like we have a genuine backup Center.

I just want to see Berios and OZ make the team. But moreso Berios.

I like the both but Oz is a bit more versatile.

Damn. I liked him better than Oz.

Oz has just been released too.

Who is pr? That really good undrafted rookie I can never remember the name of?