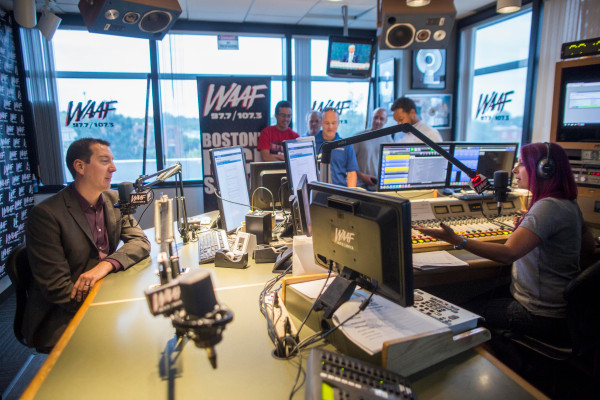 WAAF, Alternative Rock Mainstay, Has Been Sold, Will Change to Christian...

I don’t want anyone to tune in Saturday morning and get confused.

Yeah, I posted this on FB and just kind shocked me. Not sure the new company has great market research team.

I am sure that there is demand for a contemporary christian radio station in New England.

An ex-girlfriend of mine was a part-time DJ in WAAF’s sister AM radio station, WFTQ, in the late 80s. They shared the same downtown studio as WAAF, so whenever I picked her up from work (she didn’t drive), I would wait in the room outside both studios and occasionally got to chat with some of the DJs. They were all reasonably nice people in person, as I recall. There was a woman named Annalisa who was on the air in San Francisco for a long time but returned back to New England recently, there was a dude named Chuck Perks who I heard during the intermissions of Bruins games a few years ago if I recall correctly, there was another dude named Ian who used to be a host on a local UHF version of MTV, and a woman named Randy who had a pretty face and the sexiest voice but who was about 50 lbs overweight when I first met her. She went on to lose 30 of those pounds, and she told me after she lost the other 20, she was going to “reward” all the men who were nice to her while she was obese.

I spent some time in an FTQ studio next to AAF with a girlfriend who was a fill-in DJ in Worcester as well. Also late 80s. Small world.

Anyway, FM radio is just about dead for music. I don’t think this matters much.

I spent some time in an FTQ studio next to AAF with a girlfriend who was a fill-in DJ in Worcester as well. Also late 80s. Small world.

I am almost afraid to say.

You know, the title of this thread was Avoid a Blown Mind, but its doing the opposite.

I’m just an outsider, I was shot down by a non-driving part-time DJ in WAAF’s sister AM radio station, WFTQ, in the late 80s.

This is all very odd and I am a little freaked out.

slowly backs out of thread

I was shot down by a non-driving part-time DJ

If she was two-timing me with the Clown, that would be one thing.

If she was two-timing me with you, though …

#2 jibes with my decade old theory that The Planet was always just me and one other person with hundreds of personalities. So I’m going with that option.

Sprocketboy mikie and Clownboy are actually one person with multiple personalities.

I’m not sure about that, The way things are going, we were all at FTQ on the same day,

I’m not sure about that, The way things are going, we were all at FTQ on the same day,

Then again, if we are all the same person, then by definition we are always in the same room at the same time … except when we are not in a room.

Edit: I’ve also noticed that permanent East-Coasters tend to drop the ‘W’ from radio and television call signs. I include it because I’ve spent roughly half my life in ‘K’ country.

I blame Worcester. Fucked up things happen in that city.

Yeah, well, she took me to see Bruce Springsteen at the Centrum on Sadie Hawkins Day, so … nyeah.