The New England Patriots and the New York Giants will meet for the second time in 2019 at Gillette Stadium after meeting for the 15th straight year in the preseason finale.

While the two teams have met 29 times in the preseason, they will meet for just the 11th time in the regular season.

The Patriots claim a 6-4 edge in regular-season play. 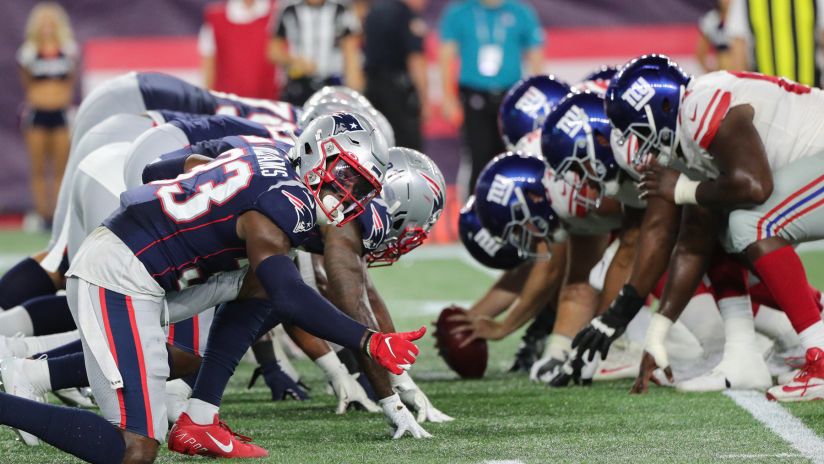 It took a while but the Patriots running game showed some signs of life in the second half at Washington. Sony Michel broke free for a couple of productive runs, including one for 25 yards before his 14-yard touchdown. The Redskins porous run defense likely helped spark that production, and the Giants come to town with numbers that are almost as bad. New York allows 130 yards per game on the ground, good for 24th in the league. That coupled with the short turnaround on Thursday could bring a tired defense to Foxborough and invite more work for Michel. Josh McDaniels did a nice job switching gears in D.C. on Sunday and might want to open with a steady diet of the running game to see if the Giants embattled front seven is up to the challenge. If not, keep pounding away.

As bad as the Giants defense has been against the run, it’s been even worse trying to stop the pass. Opponents have a passer rating of 106.8 against New York’s secondary, coughing up an average of 280 yards per game. Only four teams in the league have been worse. On paper the personnel appears to be adequate with Janoris Jenkins and DeAndre Baker at corner with Antoine Bethea and Jabrill Peppers at safety. The pass rush hasn’t been bad with 13 sacks in five games, but still opponents have carved up New York. Tom Brady shook off some early rough patches against the Redskins and wound up with another 350-yard effort. He will likely be without Phillip Dorsett, who missed most of the Redskins game with a hamstring injury and will be dealing with the short week. Josh Gordon and Julian Edelman continue to carry the load in the passing game, and Brady even got the tight ends involved a bit in Washington. The Patriots have had some struggles recently but the Giants defense has been awful, and a Thursday night road trip to Gillette Stadium doesn’t figure to be the antidote.

When the Giants run - Edge: Patriots

There is perhaps no runner in the league more dynamic than Saquon Barkley. The Giants used the second overall pick on the former Penn State star last year and he hasn’t disappointed, at least until he went down with a high ankle sprain in Week 3. Initially it was believed he would miss 6-8 weeks, but Barkley was back at practice last week and might be back for Thursday night, although that would appear ambitious. If not, the Giants running game will be in trouble. Wayne Gallman played well in Barkley’s absence before suffering a concussion last week against the Vikings. That left former practice squadder Jon Hilliman to carry the load. Barkley was averaging 6.4 yards per carry before the injury, and the Patriots one minor issue of late has been stopping the run – although in fairness it was one end around that caught them for a huge play in Washington. With no Barkley, the Giants don’t figure to muster much on the ground.

When the Giants pass - Edge: Patriots

Rookie Daniel Jones has provided some hope for the future in New York. He won his first two starts before dropping one to the Vikings on Sunday. He’s made some mistakes (three picks in three starts) but has also shown some ability, completing over 64 percent of his passes while tossing four TDs. He also moves well in the pocket, a skill he will need Thursday night against a swarming group of Patriots linebackers that is terrorizing opponents. New England has 24 sacks already in just five games, and honestly it seems like more considering how often opposing quarterbacks have been under fire. Jones will be tested as he tries to find his top targets Evan Engram, Sterling Shepherd and Golden Tate, who was reinstated last week after opening the season serving a four-game suspension for PED use. The Patriots defense has been suffocating each week, picking off 11 passes to go with the heavy pressure up front. Look for that aggressiveness to continue.

The Patriots turned to Mike Nugent to replace Stephen Gostkowski and the veteran missed his first PAT before banking his last in off the left upright. He did connect on a pair of short field goals, and he will get his first chance to kick in front of the home crowd Thursday night. The Giants have a solid kicking game with Aldrick Rosas and Riley Dixon. Rosas is perfect on PATs and has just one missed field goal while Dixon has landed half of his 20 punts inside the 20 while sporting a 45-yard net average. Rookie Jake Bailey has been solid and now has added kickoffs to his duties, recording touchbacks on all seven of his attempts in Washington. The Giants have been explosive in the return game with a 60-yard punt return and a 52-yard kickoff return. Tate has taken the punt return job and had a 17-yarder in his only attempt while Corey Ballantine handles kickoffs. The Patriots return game has been stagnant while both teams have been excellent in coverage.

February 5, 2012 - The Patriots faced the Giants in Super Bowl XLVI in Indianapolis, Ind. The Giants took a 21-17 lead when they scored with 57 seconds left in the game and held the Patriots on a final drive to secure the win.

November 15, 2015 - K Stephen Gostkowski drilled a 54-yard field goal with one second to play to lift the Patriots to a 27-26 come-from-behind victory. The Giants took a 26-24 lead with 1:47 to play before QB Tom Brady drove the Patriots 44 yards and converted a fourth-and-10 on the series to set up the game-winning field goal.

The Patriots will play on Thursday for the 20th time in team history. New England is 13-6 on Thursday entering this week’s contest against the Giants.

Tom Brady is 11-1 as a starter in Thursday games and has passed for 3,522 yards with 28 touchdowns and five interceptions. 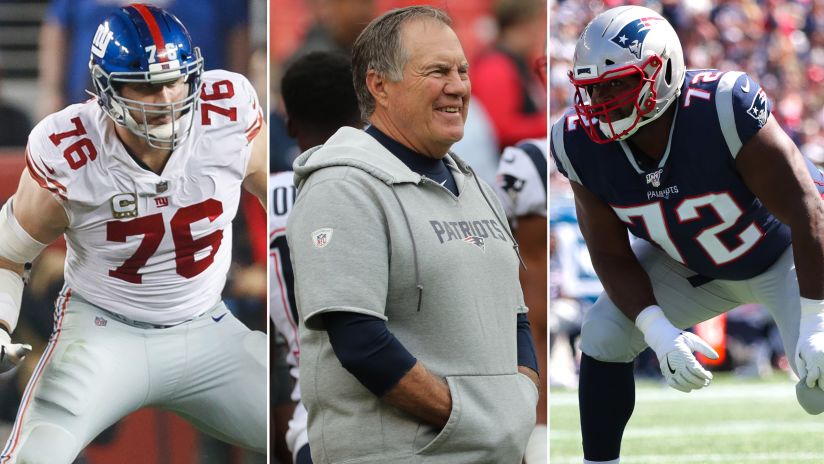 In the decades leading up to the founding of the American Football League in 1960, many football fans in New England followed the Giants, a franchise founded in 1925. New England-based NFL outfits such as the Providence Steam Roller (1925-31), the Boston Redskins (1932-36) and the Boston Yanks (1944-48) folded or moved away, leaving the Giants as the closest NFL team to New England until the Patriots franchise inaugurated play in the 1960 season.

TELEVISION: This week’s game will be broadcast by FOX and can be seen locally on WFXT Channel 25 . Joe Buck will handle play-by-play duties with Troy Aikman as the color analyst. Erin Andrews and Kristina Pink will work from the sidelines. The game will be produced by Richie Zyontz and directed by Rich Russo . The game will also stream on Amazon with Andrea Kremer and Hannah Storm calling the game.

NATIONAL RADIO: Thursday’s game will be broadcast to a national audience on Westwood One . Ian Eagle will call the with game with Tony Boselli providing analysis.

The Giants will be traveling on a short week likely without Saquon Barkley, Sterling Shepard and Wayne Gallman, and possibly without Evan Engram (knee). They face a Patriots defense that's allowed two touchdowns total in five games.
1 Like
TylerD October 8, 2019, 7:41pm #3

This could either be an utter blow out or a close game. Giants usually show up for the Pats no matter what kind of team they have. A totally different looking team this year than 4 years ago, and Pats should win no problem. But I could see the Giants keeping it close for 2 or 3 quarters.

Like I posted in the “Random Thought” thread, either this is a typo, or the Bookies at Wynn’s are out of their natural minds.

How many times will we have to watch Helmetcatch between now and Thursday?

How many times will we have to watch Helmetcatch between now and Thursday?

I refuse to watch that and turn away when I see it come on. I didn’t even like reading this post.

They just showed it twice on NFLN. If Kay Adams weren’t so hot I would totally change the channel.

thats her name…I never really put the volume on

The career that led @Rodney_Harrison to @TheHall. Looking back on some of Rodney's top plays as a Patriot before he's honored during halftime of #NYGvsNE. https://t.co/DKTC3JIKw0
1 Like
Mike83 October 9, 2019, 5:45pm #10

Dam! he showed up in big games.

Lmao! Same with tampa watching the miracle comeback of Peyton and the colts when those poor bastards have to play us haha.

The New England Patriots (5-0) and the New York Giants (2-3) announce the following injuries and practice participation.

I read someplace that tomorrow night Bill Belichick will use the unnatural cold of his frozen icy heart to lower the game time temp to sub 50s.

And that Tom Brady will use the Dark Magic of avacados bestowed upon him by his mystic shaman to cause a deluge of water to fall from a cloudless sky for the entirety of the game.

I read someplace that tomorrow night Bill Belichick will use the unnatural cold of his frozen icy heart to lower the game time temp to sub 50s.

And that Tom Brady will use the Dark Magic of avacados bestowed upon him by his mystic shaman to cause a deluge of water to fall from a cloudless sky for the entirety of the game.

Is that why we Coloradans are facing a temperature drop from today’s high in the low 80s (F) to tonight’s low in the mid 30s, with 3-5 inches of snow due to arrive?

Is that why we Coloradans are facing a temperature drop from today’s high in the low 80s (F) to tonight’s low in the mid 30s, with 3-5 inches of snow due to arrive?

when I went to Denver in early October for the Mankins nut punch game, it snowed a few inches two nights prior to my arrival and if the airport piles were not visible, yoou would never know. it was t shirt weather - crazy place.

Despite what you hear tonight during the game, Brady has already passed Peyton in TOTAL career passing yards. If you include playoff yards, Brady became the all-time leader against the Jets last November. And is way ahead of Brees too.

Not too shabby for noodle armed game managing dink and dunk system QB.

I’m gonna eat popcorn and have a beer and watch Daniel Jones (positive he’s a manning brother) compete against Pats.