Welp, the only thread on the Safe Space is one of the snowflakes crying about his feelings pre-emptively:

So then, on an off chance, let’s see if we can get some ACTUAL discussion over here on this report.

Thank you for your copy paste from the safe space. Meanwhile, back on planet earth:

New info on 8/2/16 meeting between Manafort and Kilimnik: “Months before the meeting, Manafort had caused internal polling data to be shared with Kilimnik and the sharing continued for some period of time after the August meeting.”

Shockingly, Barr was lying through his teeth: 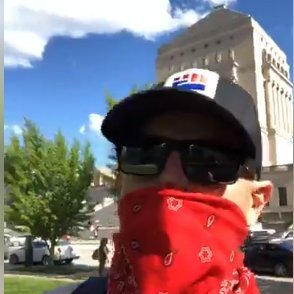 I stand corrected. The introduction says it was viewed through the lens of “conspiracy” as “collusion” is not a crime and they found nothing.

It seems that they just decided to change the definition of conspiracy/collusion. 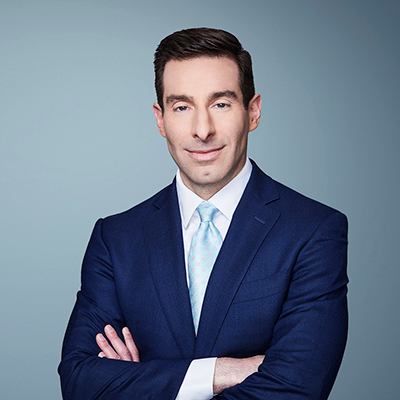 Nailed this. Here's what Barr cut off: "ALTHOUGH the investigation established ... that the Campaign expected it would benefit electorally from information stolen and released through Russian efforts." Seems relevant. twitter.com/eliehonig/stat…

Barr quotes Mueller: “[T]he investigation did not establish that members of the Trump Campaign conspired or coordinated with the Russian government in its election interference activities.” Barr omitted first part of that sentence. Want to bet it starts with “Although”?
johnlocke April 18, 2019, 3:46pm #7

The rest of that quote is more important to the topic. “the investigation did not find that members of the Trump campaign conspired or coordinated with the Russian government in its election interference activities.”

And for the record I’m not a conservative.

Page 220: “At the same time, if we had confidence after a thorough investigation of the facts that the President clearly did not commit obstruction of justice, we would state so. Based on the facts and the applicable legal standards, we are unable to reach that judgment.”

So they don’t know anything. Huh?

More context that you won’t see over on the Safe Space:

Does this sound like exoneration?
“The President’s efforts to influence the investigation were mostly unsuccessful, but that is largely because the persons who surrounded the President declined to carry out orders or accede to his requests."

Read it slowly, syllable by syllable if need be.

From Mueller report: “…upon learning a special counsel had been appointed the president slumped back in his chair and said, ‘Oh my god. This is terrible. This is the end of my presidency. I’m fucked.’”

Even Trump underestimated how much his blindly true faithful would be able to ignore all of his misdeeds.

I haven’t gotten to that point yet. Do you know where it is and who said it?

Gee, lying that materially impairs an investigation. The usual definition of Obstruction, prior to this Orwellian idiocracy that we now see in Trump’s America.

Sorry, they were charge for it. The president wasn’t it.

This the full context of what you quoted. The rest of what Trump said is vital to this exchange with Sessions. 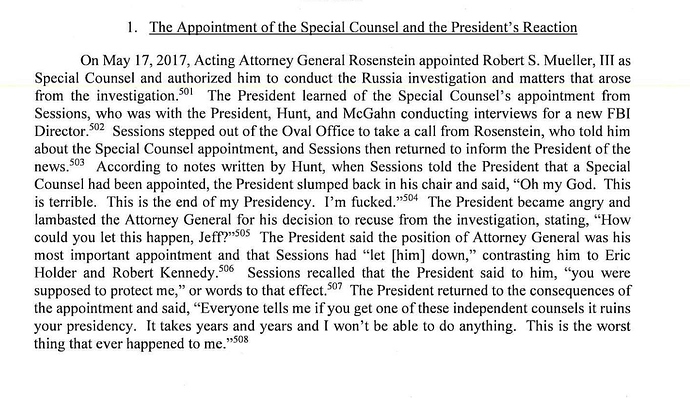 Page 300: After Trump directed McGahn to call Rosenstein and have Mueller removed, McGahn “called his lawyer, drove to the White House, packed up his
office, prepared to submit a resignation letter … told Priebus that the President
had asked him to ‘do crazy shit.’”

Stable genius. Clearly, the president’s own attorney is just manipulated by the lib’rul media. 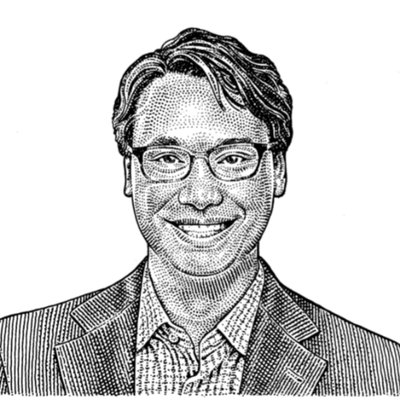 Mueller says Trump’s obstruction failed because others didn’t follow his orders to obstruct: “The President 's efforts to influence the investigation were mostly unsuccessful, but that is largely because the persons who surrounded the President declined to carry out orders…”

Do note, you don’t have to SUCCEED in order to obstruct justice. The charge is the attempt, not contingent on whether you’re actually successful.

At least, that’s the way it used to work before we got into this Orwellian Trump America.