Tonight college football starts with a rivalry game between Miami and Florida. Should be a good game. As much as I hate it I will be actively rooting for Da U to put an epically devastating, seaon ruining beat down on the Gators.

And now onto the unfettered excitement portion of this thread…

I don’t follow college lol. I need to though.

As a RedSox and Colts fan you seem to be able to withstand years of underachieving. Maybe you even secretly like it. You’d make a great Gamecock fan. Welcome aboard.

I love this video because 1) Mayonaise is a great song and 2) it forces me to use my imagination to figure out how Billy Corgan ended up playing the song with three people I’ve never seen in what looks like a tiny conference room somewhere. My best guess is that Corgan accumulated a few dozen traffic tickets in some city somewhere and as punishment the judge made him play a set with his son’s Smashing Pumpkin cover band.

What, in your opinion, are the biggest college football rivalries?

These are the ones I can think of:

Harvard-Yale (Ivy League; the Original)
Cal-Stanford (Pac-12)
Michigan-Ohio State (Big 10, or 12, or whatever TF they call themselves these days)
Gators-Canes (not sure)
Alabama-Auburn (SEC)
Texas-Oklahoma State (Big the other number)
Notre Dame - USC (Cross-conference, sort of)
Clemson - ???

The Pac-12 consists of six different rivalry pairings; I’m not sure if the last one on this list has been around long enough to have fostered much hatred yet.

Lmao glad to be apart of this!

Clemson - South Carolina is actually the second longest consecutively played rivalry game in the NCAA. They have played every year since 1896. Its a HUGE deal here. Clemson fans even put on their best pair of overalls, take their yearly bath and stop making out with their first cousins during that game week its so important.

Is there like an Oakland underdogs team. I’ll cheer for them lol.

Lol I made it until 20 min til kick off and then I fell asleep on the couch. Just woke up 45 min ago.

I guess Florida won. Looks like it was a good game. Sorry I missed it.

I’ve abused my “Regular” privileges by converting this to a general thread about College Football.

Roll on, You Bears.

It looks like this will be a typical Pac-12 year, where a bunch of better-than-average teams take turns beating each other, and none gets with a sniff of the playoffs. 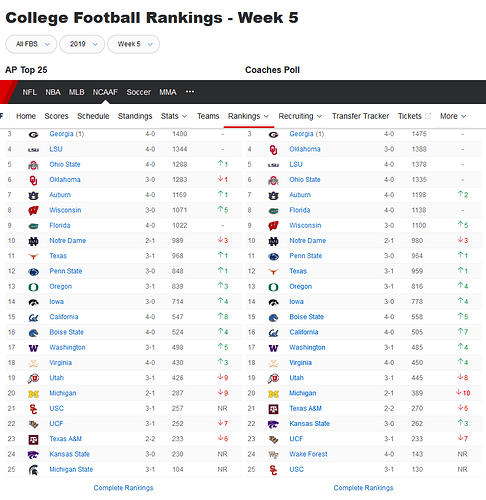 And my Cal Bears are still undefeated after a controversial could-have-gone-either-way end-of-game call against Ole Miss. In a case like this, I don’t know why the upstairs officials don’t automatically press the “we need a replay” button.

I have to say, though, full marks to the Ole Miss WR Elijah Moore for already preaching the Patriot Way while still in college. A lot of these kids must have grown up on “We’re on to Cincinnati.”

No one had a better vantage point on if Moore was in the end zone than Moore. But the sophomore receiver didn’t want to speak out of turn.

“The game’s over with,” Moore replied when a reporter asked him if he scored on that third down play. “It really doesn’t even matter now. We’ve got Alabama next.”

If you bet the Florida-LSU game today, I hope you took the ‘over’.

Jeez. Watching this Florida-LSU game reminds me of old school Connors-Bjorg tennis matches. That’s how quickly the ball is moving back and forth on the field of play.

Stop the presses. LSU made a defensive stop.

I’m embarrassed to say this I don’t follow college. I had to get a friend to explain to me what ranking means In college lol.

Well, the Coaches think LSU ought to leapfrog Ohio State, at least. 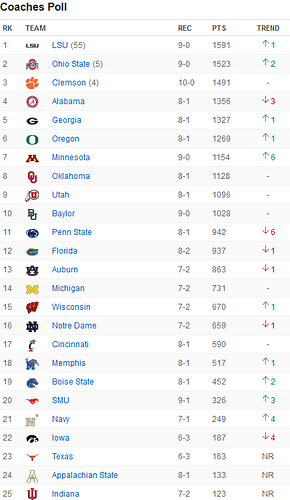 If Baylor continues to beat the tar out of OU, they deserve to be in the playoff conversation, at least.

And … Tua’s season is over. Curtains for Alabama’s playoff hopes? 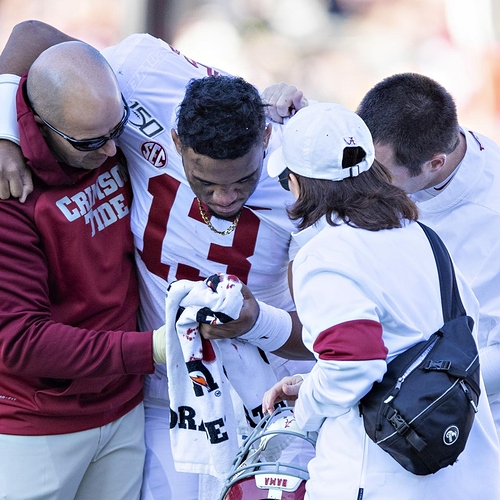 Alabama quarterback Tua Tagovailoa 's season is over because of a right hip dislocation he suffered during Saturday's game against Mississippi State, the school announced ...

If Baylor continues to beat the tar out of OU, they deserve to be in the playoff conversation, at least.

Baylor gets the ball next. They could still win this if they get their act together for one more drive.