75 decibel crowd noise limit has been lifted beginning this week. That should help with home field advantage type of thing.

The New England Patriots return to the confines of Gillette Stadium this week to square off against the Las Vegas Raiders for the first time. The franchise relocated from Oakland to Las Vegas this last offseason. This week’s game vs. the Raiders marks the first of three consecutive games against the AFC West.

The Patriots and Raiders will meet for the 36th time overall and for the 33rd time in regular-season play this Sunday when the Patriots host the Las Vegas Raiders at Gillette Stadium.

The meeting will mark the Patriots first game against the Raiders as the Las Vegas Raiders after the franchise relocated from Oakland this year.

The Patriots and Raiders last played against each other on Nov. 19 2017, at Estadio Azteca Stadium in Mexico City in a Raiders home game. The Patriots won the international match, 33-8.

The teams have met three times in the playoffs, producing a memorable, classic encounter on each occasion. In 1976, the Patriots beat the Raiders, 48-17, in the regular season before losing a playoff game in Oakland, 24-21. The Patriots advanced to their first AFC Championship Game in 1985 after beating the Raiders, 27-20, in Los Angeles. In 2001, the Patriots beat Oakland, 16-13, in overtime in the last game ever played in Foxboro Stadium, en route to winning Super Bowl XXXVI.

The Patriots lead the all-time series with a 19-15-1 advantage, including a 2-1 postseason record.

The series between the two charter members of the American Football League dates back to 1960, the inaugural season for each club.

Although the teams played frequently prior to the 1970 AFL-NFL merger, they have met just seven times in the regular-season since 1989. 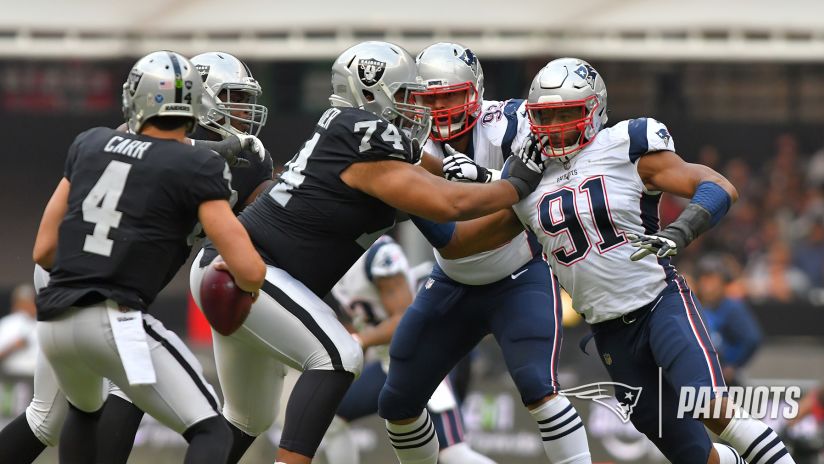 After an extremely impressive opener for the Patriots offensive line and running game, things took a significant step back in Week 2 in Seattle. Other than some occasional Cam Newton scrambles, the Seahawks contained the Patriots on the ground. That included Newton on a pair of designed runs late in the game, one a two-point conversion and the other on the deciding final snap from the 1. The good news is Las Vegas (still getting used to that) doesn’t figure to be as formidable up front. The Raiders defense has struggled in the early going, although most teams struggle to contain Carolina’s Christian McCaffrey, as was the case in the opener. Vegas is allowing 4.9 yards per rush, and although it’s early that was the case in 2019 as well. Sony Michel has yet to find much success in his two games and has been held to 3.3 yards per carry as the lead back. Rex Burkhead, who has basically split the load with Michel, has been even less effective with a 2.6-yard average. But Newton’s production has to be factored into the equation. He leads the team in attempts (26), yards (122) and touchdowns (4) while basically carrying the offense. The Raiders front of Maliek Collins and Johnathan Hankins inside of Clelin Ferrell and Maxx Crosby will have its hands full with the physical and mobile Patriots offensive line. Linebackers Nick Kwiatkoski, Nicholas Morrow and Cory Littleton had trouble containing McCaffrey and New Orleans’ Alvin Kamara (6.1-yard average) on the edges, which the Patriots may try to exploit as the run game looks to add dimensions as the season progresses.

Newton showed he can still light up an overmatched secondary with his performance in the fourth quarter in Seattle. He leaned heavily on Julian Edelman but also mixed in some effective completions to N’Keal Harry and Damiere Byrd. The Raiders secondary is still developing but has struggled in the early going. Corners Damon Arnette, Trayvon Mullen and Lamarcus Joyner join safeties Jonathan Abram and Erik Harris. There’s some talent in the group but also some inexperience, particularly rookie first-round pick Arnette. The former Ohio State Buckeye has allowed some plays as he gets acclimated to the NFL but his speed and instincts have also been on display. And the Raiders pass rush has been non-existent early on. Maxx Crosby, who had 10 sacks as a rookie in 2019, has been quiet. The Patriots will need to find ways to get others involved. Edelman was immense in Seattle but at some point the physical pounding he takes weekly will take its toll. Harry and Byrd showed some promise, particularly Byrd, who impressed with his route-running near the sidelines on some key third downs. Newton will continue to evolve in the Patriots passing game as well, perhaps by utilizing the tight ends a bit more frequently as they become more comfortable as well.

When the Raiders run - Edge: Raiders

The Patriots struggles stopping the run reared their ugly head once again in Seattle last week as the Seahawks piled up over 150 yards on the ground. That could spell trouble this week with impressive second-year running back Josh Jacobs heading to town. Jacobs had three touchdowns in the season-opening win in Carolina and followed that with another workmanlike outing Monday night against the Saints. Jacobs averages just 3.5 yards per carry thus far but the Raiders will work to establish him between the tackles. He will be a huge test for the Patriots undermanned front, especially if right tackle Trent Brown can return to the lineup after missing the Saints game with a calf injury. With Brown the Raiders have one of the best offensive lines in football, and personnel issues have caused the Patriots to use some lighter fronts in the early going, which could mean trouble against Jacobs and the Las Vegas front. This matchup will be one of the main keys on Sunday as Jon Gruden tries to shorten the game by playing power football.

When the Raiders pass - Edge: Raiders

The Raiders strong offense is not limited to the running game. Derek Carr can throw it, too, and he has some impressive weapons to choose from. Rookie first-round pick Henry Ruggs can fly. He’s the type of player that longtime Raiders owner Al Davis would have loved. He’s been impressive at the start of his career with his ability to get deep. Darren Waller is one of the league’s most underrated tight ends. He had over 1,100 yards receiving in 2019, and he will be a difficult matchup for a Patriots secondary that struggled last week in Seattle. Carr loves Waller and goes to him often. In the Monday night win Waller was targeted on 16 of Carr’s 34 throws and accounted for 12 of the 28 completions. He’s an athletic handful. Elsewhere Carr will try to mix in Bryan Edwards, Hunter Renfrow and Zay Jones – a solid if unspectacular set of wideouts. Renfrow, the former Clemson star, does his best work in the slot and on third downs as Carr’s safety net. The Patriots secondary will look to bounce back from a poor performance in Seattle where it allowed five touchdown passes. Stephon Gilmore, the reigning Defensive Player of the Year, has been slow out of the gates. Don’t expect that to continue.

The Patriots still don’t look like themselves in the kicking game. What traditionally has been a strength has been spotty at best in the first two weeks. Nick Folk has missed a pair of field goals, the kickoff coverage allowed Seattle’s Travis Homer to get past the 25-yard line three times Sunday night, including to the 43 on one return and the Patriots return game has been quiet in both games. Las Vegas kicker Daniel Carson has been solid thus far, particularly on a 54-yard field goal in the final two minutes that salted away a huge Monday night win over the Saints. A.J. Cole handles the punting for the Raiders while Jake Bailey remains solid in that role for New England. Jalen Richard (kicks) and Renfrow (punts) will handle returns for the Raiders while the Patriots have used Byrd on punts while rotating J.J. Taylor and Kyle Dugger on kicks. Neither provided much of a boost in Seattle.

TALE OF THE TAPE 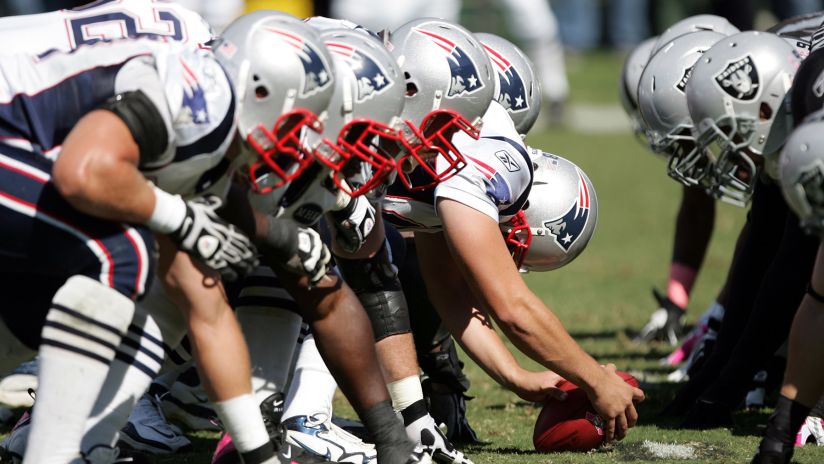 Players to Watch: Patriots vs. Raiders

Patriots.com’s Mike Dussault shares his players to watch ahead of the Patriots Week 3 matchup against the Las Vegas Raiders on Sunday, September 27, 2020. 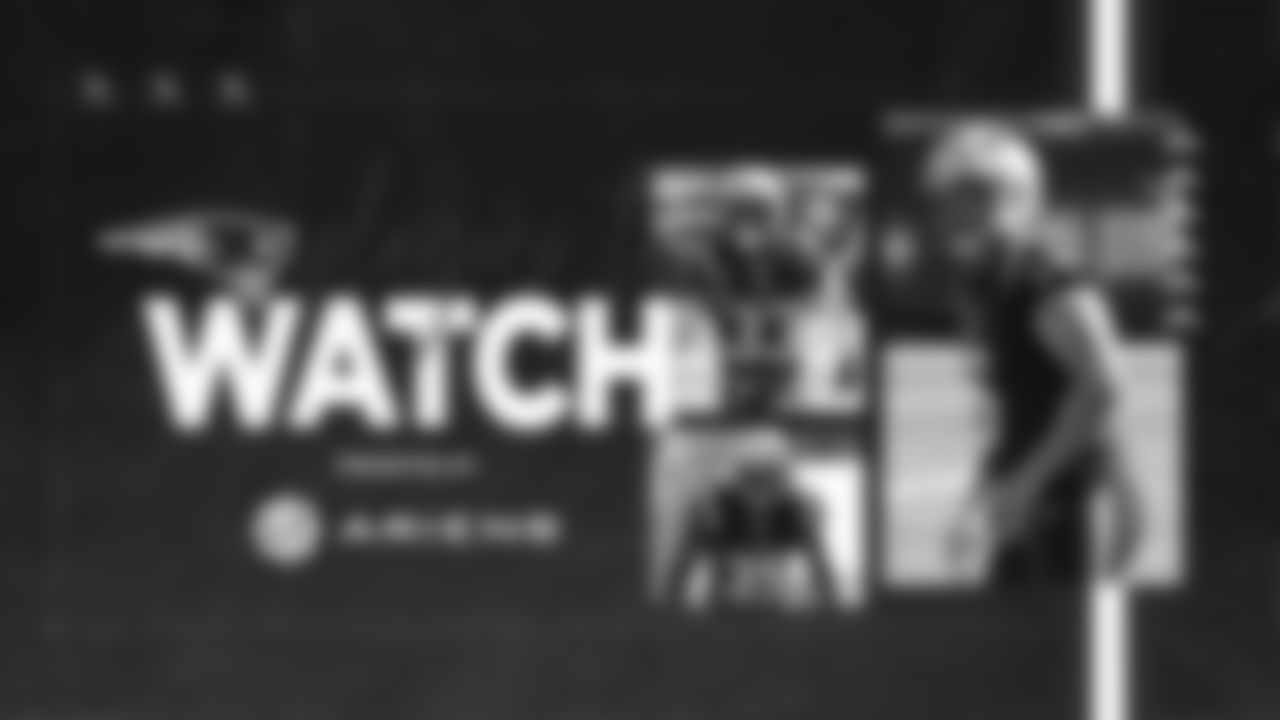 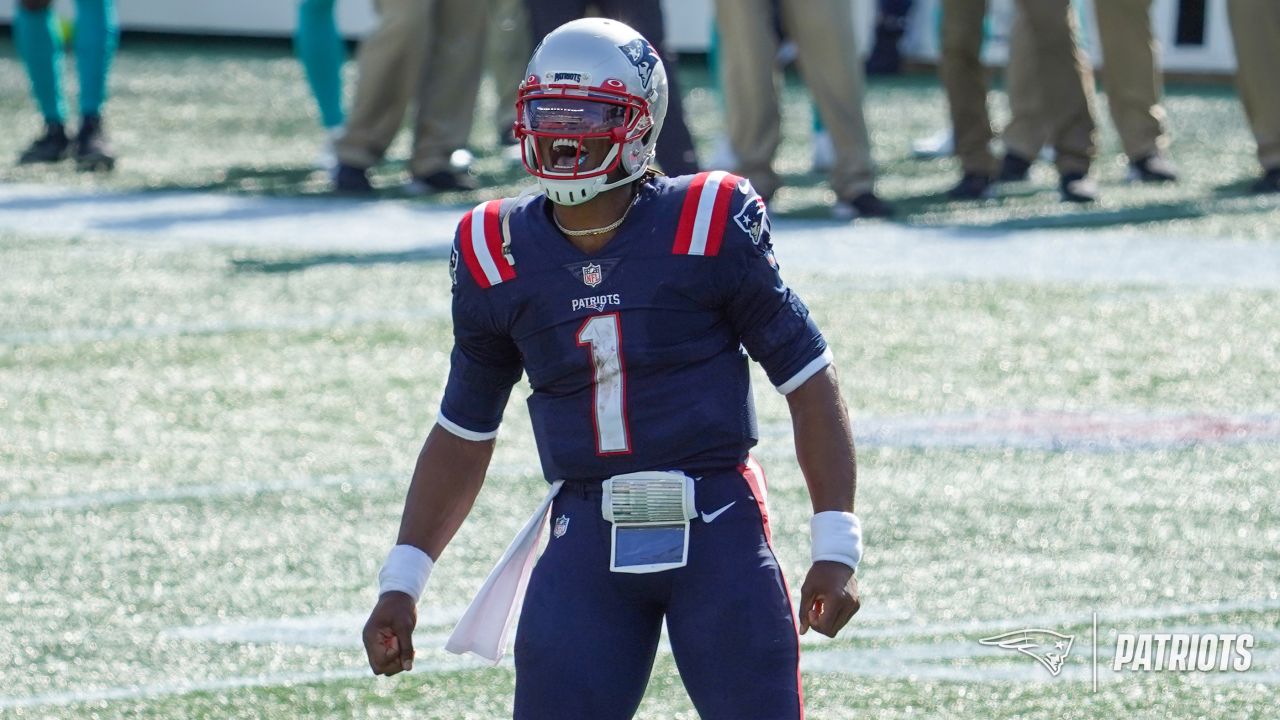 Cam Newton, QB: After throwing for nearly 400 yards against the Seahawks, there&#39;s no question this is going to be a fun season watching the rejuvenated quarterback in the Patriots system. He&#39;ll be must-watch every week, and a combined effort of the ground attack from the Dolphins game and the air attack from the Seattle game will be something he&#39;ll hopefully put together at some point.1280×720 139 KB

Cam Newton, QB: After throwing for nearly 400 yards against the Seahawks, there’s no question this is going to be a fun season watching the rejuvenated quarterback in the Patriots system. He’ll be must-watch every week, and a combined effort of the ground attack from the Dolphins game and the air attack from the Seattle game will be something he’ll hopefully put together at some point.

Johnathan Abram, S: Abram is a hard-hitting safety that leads the Raiders in tackles and is sure to be very involved in almost every play. The Patriots should look to take advantage of his aggressive play style and will need to be aware of him on every snap.

CAM NEWTON LOOKS TO RISE IN THE RUSHING RANKS

TELEVISION: This week’s game will be broadcast by CBS and can be seen locally on WBZ-TV Channel 4. Jim Nantz will handle play-by-play duties with Tony Romo as the color analyst. Tracy Wolfson will work from the sidelines. The game will be produced by Jim Rikhoff and directed by Mike Arnold.

LOCAL RADIO: 98.5 The Sports Hub is the flagship station for the Patriots Radio Network. A complete listing of the network’s 38 stations can be found here. Play-by-play broadcaster Bob Socci will call the action along with former Patriots quarterback Scott Zolak, who will provide color analysis. The games are produced by Marc Cappello.

“He’s just a big guy who can make plays and get open. The guy is good. That’s all I can say about him. He’s good. And we got something for him this weekend,” Jackson said. 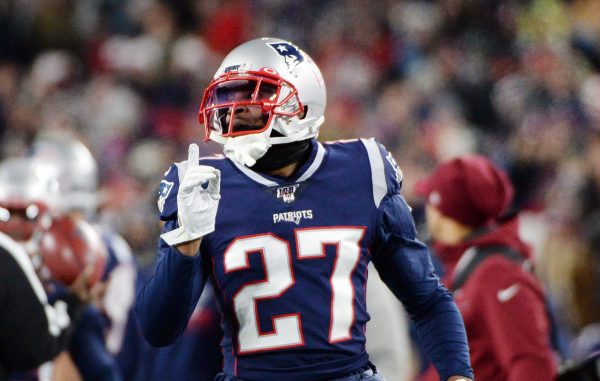 Darren Waller is arguably the biggest threat at tight end in the NFL right now.

I think Gruden wants this one bad. I mean they are 2-0 and he wants to exorcise some demons.

Huge game for this team.

Morning fog at Gillette Stadium, where the Patriots host the Raiders (CBS, 1 p.m. ET). Via @weatherchannel, the forecast calls for temperatures in the mid-70s at kickoff, with 5% chance of precipitation and winds around 10 miles per hour. https://t.co/KcO34J7ZdT 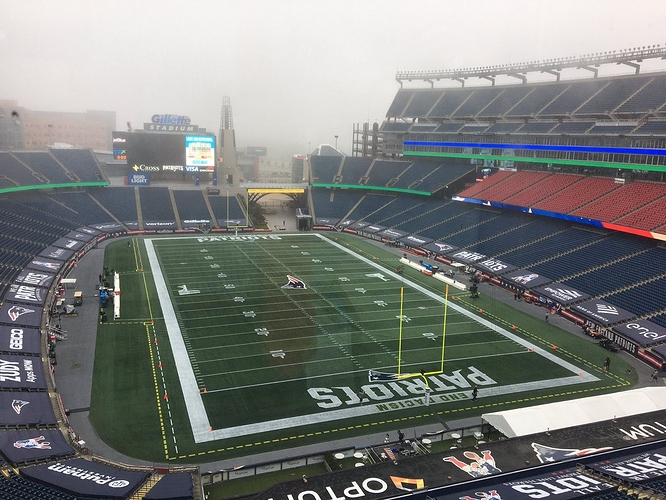 I’m on the record but I’d like to state once again that I really like what Gruden is doing with the Raiders. He burned it to the ground and is building a monster if he can keep it up.

Rough game on offense so far.

Shit calls on the final series , 3rd down

so demoralizing for the defense.

I love this team. They got a shot. I expect a loss next week, but they are fun to watch.