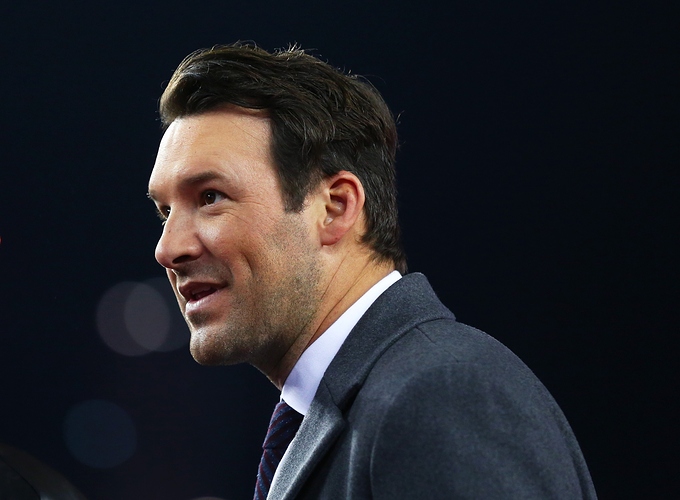 Tony Romo Agrees To New Deal With CBS Worth Over $17M Per Year |...

Andrew Marchand of the New York Post reports that Tony Romo and CBS have agreed to a contract that will make him the highest-paid NFL analyst in TV history. According to Marchand, Romo will make around $17 million per season over...

I hope he doesn’t start guessing wrong with his play predictions.

For that kind of money, the world expects perfection.

I mean the dude is pretty entertaining to listen to, and has some kind of weird power with predicting stuff. But line Sprocketboy said. Would be kind of funny if his predictions started to go downhill lmao.

This is an excellent illustration that we do not live in a meritocracy.

How do you figure? Tony is the best at what he does in a market that supports this kinda payment.

You can never convince me that talking about football is worth 17 million dollars a year.

I watch football to see the players, not to listen to the commentary. The players are the show. But they are in an artificially restricted market and Tony isn’t.

I’ve heard this exact same argument from friends that say no person on earth, not even a CEO nor especially a football player is worth $30 million a year.

This is a faulty argument at base.

But let’s split the difference and watch Faulty Towers.

I actually agree with AlmostOldGuy, but with saying that. Romo is fantastic to listen to! Might be overpaying him I agree with that. But he truly is fantastic at what he does. I swear he was born for this.

I thought he was much better his first year than he was last year.

You can never convince me that talking about football is worth 17 million dollars a year.

Well, if his presence alone is generating something like $100 million dollars in extra revenue for his employers, I don’t see 17% of added profit as an exorbitant commission. My Father, Brother, and Ex were all in corporate sales, and that’s about in line with what they were getting (typically worked out to be between 2-3% of gross sales).

Whether or not his presence ought to generate that much more revenue is another debate, but if it does, are you proposing that the stuffed shirts at CBS keep more of it for themselves?

I struggle with the idea that he’s generating revenue for NFL broadcasts.

I mean do people really watch a game because they want to hear the analyst?

I mean do people really watch a game because they want to hear the analyst?

I thought he was awesome both years. His style didn’t seem to change. I think he will be good for years to come unless his super power dissolved and he can’t predict stuff anymore.

“Here’s a guy, Rodgers that I just love to blow and get on my knees for” sickening

I will concede that he’s better than any of the guys on now, it’s a low bar though.