I’m still not convinced that this show was not a ridiculously ingenious work of fiction pumped out by the giant endangered species propaganda machine.

Otherwise I think the trans man who worked at the zoo and who had his arm eaten off by a tiger and who returned to work 7 fucking days later because you know sometimes a tiger is going to eat your fucking arm off and its not the tigers fault its a tiger and that’s what tigers do…just another day amirite?..summed it up best when he/she said something to the effect of “All the time, effort and money spent on arguing and it didn’t help one damn animal”

Or possibly when the gay, polygamous, gun toting, meth using, mullet wearing, zoo owning. country music singing, Presidential candidate main character said, " We have t shirts in the gift shop that say ‘I got peed on by a tiger’ "

Its one of those two.

It was a fucked up series for sure. I just watched it Sunday, and only a few minutes into it, I couldn’t turn it off. It was a masterful production. And just about everyone on camera in it deserves to be in jail if their stories are half true.

I just watched all 8 episodes with no breaks.

I’m not sure if I should be disgusted or infuriated.

One thing though Joe Exotic has a surprisingly good singing voice.

One thing though Joe Exotic has a surprisingly good singing voice.

It wasn’t him doing the singing in his videos. I watched them all at once as well.

I mean I know he was obviously lip synching in the videos, but was he not singing on his CDs?

I was about to watch this but started Ozark and am about done with season one. hoping to be down with season 2 by sunday and with that up to date I will watch this tiger lilly thingie.

Weird one lmao. We watched it last weekend. Not one character do I like in it lol. Such weird people. Strange documentary. Fascinating though.

need to watch but the missing person of the 1st ex husband or something is being re-opened.

It’s a strange one. I don’t think I enjoyed it as much as other people did but it was worth the watch. 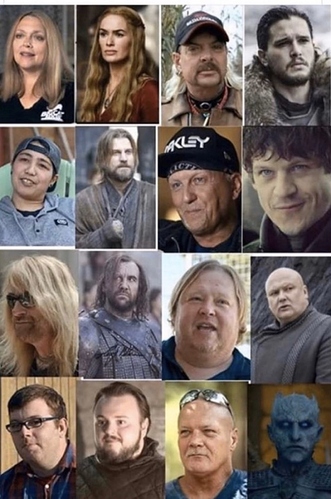 Haven’t seen Tiger King but I think I totally get this reference.

That is too funny.

Yeah listening to people at work I thought I was going to be way more insane. Basically just a guy with a big mouth who wasn’t capable of shutting up even for self preservation.

The thing that really pissed me off was that even the cracked out meth heads living in a rat infested mobile home had nicer cars than me.

some kid or niece or something is going to the daily mail with an in-depth interview about the guy boning the lion and tiger kittens and other typical trailer park boys gossip - this is better than Dance Moms!!!

Lmao. So I should watch the new episode lol