Something to remember even in the darkest of times, the light of the 2004 Boston Red Sox.

While it was the 2001 Patriots Superbowl defeat of the Rams in full context of the shadow of 9/11 which was the centerpoint of the best day of my life for many reasons, this 2004 season in its entirety is what dreams are made of.

In 2004 the Boston Red Sox accomplished the seemingly impossible. They changed everything for New England and far beyond.

After 86 years of heartbreak which almost seemed divine retribution in nature for the karmic crime of trading Babe Ruth to the Yankees for pennies they slayed all demons and found glory.

This is a story that is far more than about baseball alone. It holds within it metaphors, symbolism and beautiful principles which did not just bring ecstay to the New England region but inspired much of the country and there was a reason for it. It was the most American of stories. Through dedication to principle, hard work and a complete belief in themselves this group of self described “idiots” renegades actually “Cowboyed Up” and took it the greatest team historically that baseball had ever seen, the hated division rival at whose hands so many heartbreaks were delivered.

After losing in a devasting fashion in game 7 of the 2003 Amercan League Series new ownership fired the coach and brought in Terry Francona. In a story for the ages young hometown phenom at General Manager Theo Eptsein delivered a key piece to the puzzle over Thanksgiving dinner in Arizona when he convinced pitcher Curt Schiling to join the Red Sox.

There are so many incredible subtexts here from political views, to personalities that were hard to imagine could fit together to so much more.

In 2004 the greatest pitcher I’ve ever seen in his prime, Pedro Martinez along with Manny fucking Ramirez, the legendary David “Big Papi” Ortiz, Curtis Schilling, Derek Lowe, Johnny Damon and a cast of, well cast offs lead by Kevin Millar took it to the house.

After being down 3 games to none to the Yankees they completed a 4 game sweep which had never been done before in any sport and beat the hated New York Yankees, who were the evil empire in 7 games to propel them to the World Series where they beat the St. Louis Cardinals in 4 straight games.

The World Series against the Cardinals was the cherry on top but creating the biggest choke in sports history at the expense of the Yankees was the meal, the drinks, the desert and the joy.

Professional sports to me is one of the clearest visions of man’s potential for greatness. These athletes are the pinnacle of human greatness in physical form but they are driven by principle without devotion and integrity to they would achieve nothing.

October 2004 was the when all curses where broken and the Red Sox declared once and for all, “We are magnificently human, we got this, anything is possible”.

The rest is history and 3 more championships have followed.

For anyone, and I know many of are, starving for goodness, elation, greatness and a sight of what is possible, I highly suggest watching the brilliance of this season and understand the meaning of it for all of us. 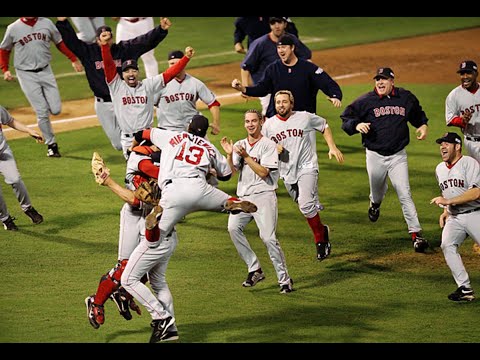 Thanks for the post @johnlocke this was such a special year. Also the first year I really became a Sox fan. I was 17 years old. I was hooked from this year on. Just amazing.

Thanks for the post @johnlocke this was such a special year. Also the first year I really became a Sox fan. I was 17 years old