Seymour one of 15 HOF finalists 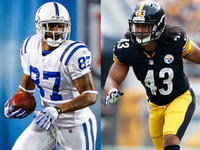 Hall of Fame announces modern-era finalists for Class of 2020

The Pro Football Hall of Fame is unveiling its modern-era finalists for the Class of 2020 on Thursday.

I liked Seymour a lot initially. He could be pretty dominant on the inside, but I never thought of him as HOF caliber. I guess he was better than I thought?

Seems to me Rodney deserves it far more though…

I did too but listening to one of the people in the room talk last night in NFLN I realized the other players of his time feel he sacrificed a lot of stats to play the Game in the Patriots way. That had he gone to a different team he would have had impressive stats and a 1st time ballot inductee.

Yeah I was pretty surprised how far down the all time sack list he is (like 140th all time ) But I guess his contrubutions are hard to quantify, like an offensive lineman.

Yes, in Hoodie’s system he had a few different roles and pass rusher was only part of it.