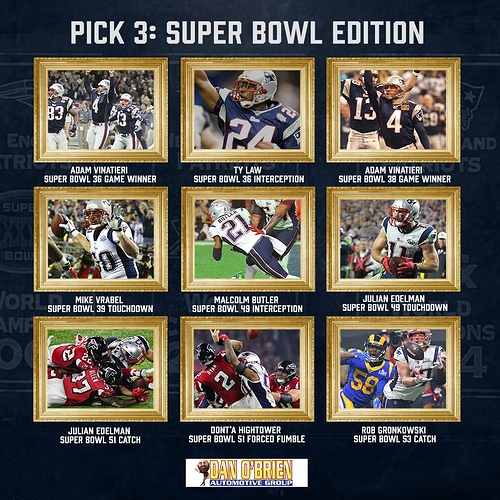 Of these for me in no order:

There are so damn man moments it’s to choose. But I think yours are spot on.

I may switch kicks with SB XXXVIII only because I was there but you have it correct if I didn’t get lucky to go.

Yeah, these are the best. Honorable mention to Vinatieri in 38, but 36 edges that one out because it broke our maiden (to use another horse track expression).

I almost replaced the Edelman catch with the Hightower sack and fumble, as I feel that was THE key turning point in 51.

I could see it but that catch was one of the greatest catches ever, showed the level of concentration Jules has for the game. the hand eye coordination to make. An amazing athletic feat.

Butler gets all the credit but some low level scout figured out the tendency of the Seattle and poodle Pete. That guy deserves to be known someday. Also Brandon Browner coached him up on the field, giving instructions. but Butler made the play!!!

Adams greatest catch was the snow game, so even with this kick it was second best - that is crazy and HOF material.

Was that Vrabel’s only Super Bowl TD? Because I seem to remember they pulled that “Vrabel lines up at TE” stunt at least twice.

He caught one against the Eagles while being held!!!

“I tell everybody all the time, the most physical game that I’ve ever played was when we played the Panthers in the Super Bowl. Like bar none . More physical than any Pittsburgh game, any Ravens game, any other game that I’ve ever played. That offensive line was physical. And I’ll say this. I’ll let you do some research on it. I heard they weren’t all clean during that game, that’s been the going word. They haven’t been clean. So we need to dig a little deeper. I was playing against some robots out there, I’m telling you.”

Interesting to hear him openly accuse them on PED’s.