Trip down memory lane. Someone posted on IG. Bring back some memories? I didn’t even really watch football when Brady was selected haha 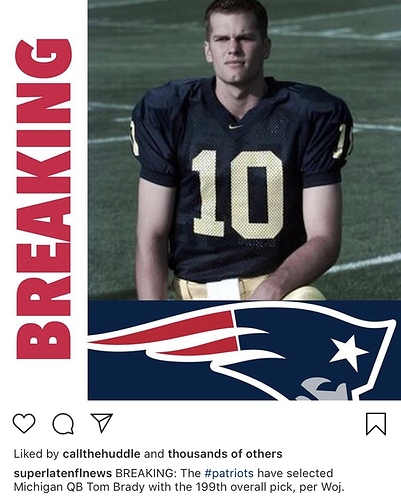 I remember clearly thinking to my dumbass self it was a throwaway pic.

To be fair though it was Bill’s first year and I dont think anyone outside of his inner circle would have known what if anything he saw at that time.

His methods were not even close to known round these parts in 2000.

Then there was the whole thing with Drew getting hurt in 01.

Tom busted his ass then took the reins and never looked back.

I will never forget the story Kraft tells about Brady as a nobody rookie telling him that he was the best decision the team ever made.

Tom knew it and Bill said there were signs even in 2000 about his potential.

Greatest draft pick in NFL history for a number of reasons.

You aren’t alone man. I’m pretty sure most people thought that to be honest. My dad definitely thought so too granted he’s a Dallas fan but he remembers that day clearly. Didn’t give it too much thought, same as I wouldn’t give too much thought to the colts selecting someone on the 199 pick. And then… the world was in for a treat… became one of the greatest of all time in the realm of Michael Jordan and Wayne Gretzky.

I wasn’t aware of the guy on the roster until he entered the game when bledsoe got hurt. That is the more interesting history. IMO. His first passes in that game against the Jets. Leading to the next games … His first wins. Etc. How did Weis run that offense with “rookie” QB. Etc.

I’ve got young talents working with me who are under-utilized, too, and it pisses me off.

My short-sighted, narrow-minded, so-called “superiors” are so afraid of not meeting their precious monthly metrics that they refuse to give these young talents assignments that they would likely fail at on the first try, but actually learn from.

Thankfully, BB and crew don’t fall into that category.

It’s amazing to think about that BB carried 4 QBs that year when now it is usually only 2.

The man knew what he was doing. Colts only had two qb most of the year. Brought in Chad Kelly later when Jacoby was hurt, but ya it’s unheard of now to have more than 2. Saints do though I guess a