A bit of an eyesore, but interesting. 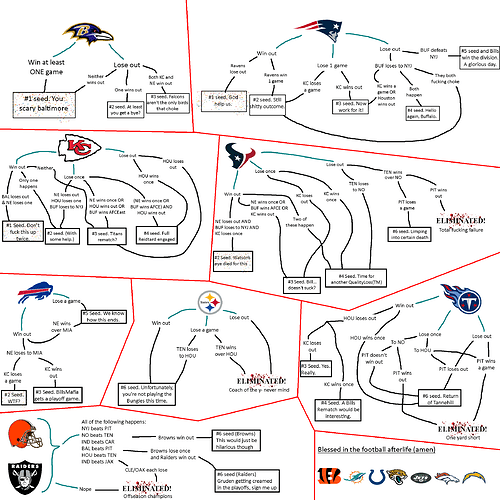 This is good, in spite of the fact that a Patriot Hater put it together.

The Patriots may have played their best game of the season in a 24-17 win over the Bills on Saturday and in doing so clinched their 11th straight AFC East division title. A win against Miami in Week 17 will clinch a first-round bye as well.

That’s about where the good news ends in terms of postseason ramifications in Week 16. Both Baltimore and Kansas City won, so the Ravens clinched the 1 seed and home field throughout the playoffs and the Chiefs kept the heat on New England in the fight for the 2 seed.

A Chiefs win over the Chargers coupled with a Dolphins upset of the Patriots would cause the teams to swap positions, meaning the Patriots would be forced to play on wild card weekend as the third seed. While a Patriots win over Miami would seem to be a relatively sure thing, the fact that Kansas City won makes it difficult for Bill Belichick to rest some starters in the finale.

Elsewhere in the AFC, only the final spot remains up for grabs. The Texans can still leapfrog Kansas City by winning at home against the Titans if the Chiefs lose to the Chargers due to their head-to-head victory earlier in the season. Buffalo is locked into the 5 seed after losing their chance to win the division on Saturday.

Pittsburgh, Tennessee and Oakland are still alive and vying for the sixth and final spot. The Titans currently are in by virtue of a stronger strength of victory over Pittsburgh and would capture the 6 seed with a win while the Steelers can do so by winning and having Tennessee lose or tie. The Raiders need a variety of scenarios to unfold, including beating the Broncos and having Tennessee, Pittsburgh and Indy all lose.

It may not be worth wasting much energy over, but it would seem that the best-case scenario for the Patriots here would by a Tennessee win. The Titans earning the last spot and therefore likely heading to Kansas City the following week in the 3-6 matchup would represent the most difficult potential opponent for the Chiefs. Again, not a major deal but something to think about as Week 17 unfolds.

I hope Tennessee makes it in over the Steelers. I just don’t see Pittsburgh giving anybody a remote challenge with their current quarterback situation. It’s crazy, if they had big then I think they could do some serious damage because that defense is pretty good, but those two clowns they have as back ups are seriously terrible LOL

Hijacking the thread, and expanding it to include the whole NFL.

ESPN has an “NFL Playoff Machine” that lets you pick next week’s winners, then tells you what the playoff seedings would be, in both conferences, under your scenario. 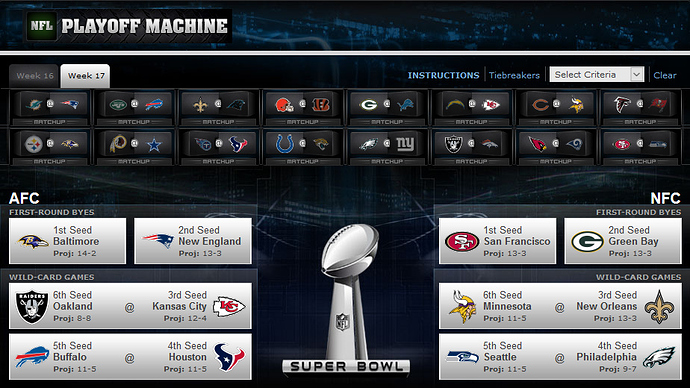 Patriots have the late game (8:15 EST) on Saturday, January 4th.

Note that the times in the schedule below are MST. 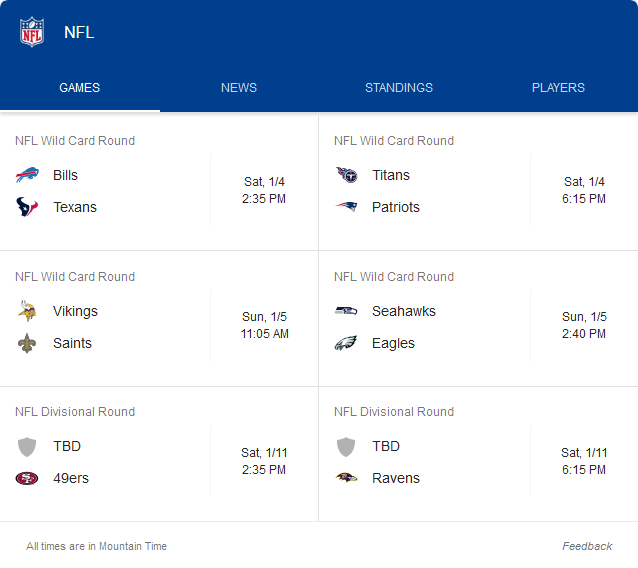 So, if they beat the titans.

They are then AT arrowhead, and then most likely at the ravens. (unless bills or Texans surprise them.)

But, I’m not confident they will even beat the titans.

Well, this post made me laugh anyway, if not feel a little bit better. From a Bills fan on Reddit…

As a Bills fan, I don’t see how you guys don’t end up in the Super Bowl.
The Titans? Are you fucking kidding me? You’ll smoke them.
Then you’ll be coming off a “signature win” going into Reid’s house, lol. You guys beat them in the regular season–it was the worst officiated game I’ve ever seen.
Then Lamar if he makes it that far (remember his game in last years playoff?) or host to either Buf or Houston–I like New England’s d at home in the elements vs. Houston’s offense. If it’s Buf, you beat us twice.

I mean, I love seeing you guys in disarray, don’t get me wrong. But I’ve been rooting against you fuckers every week for Belichick’s reign, and spastic losses to Miami on some last minute fuckery is just as much a part of your legacy as ass fucking chump QBs in the playoffs and stealing their souls forever. You literally made Andrew Luck lose his self esteem and quit the sport. I don’t think Ryan Fucking Tannehil of all people is going into that stadium in January and ending the greatest dynasty in the history of organized North American athletic competitions.

And that’s coming from someone who watched Mark Brunelle and the one-year-removed-from-expansion-draft Jacksonville Jaguars come into Rich stadium and end the Bills “dyansty.” Those Bills were old, slow, had nothing left in the tank, and limped into the playoffs at 10-6.

Hate you guys, hope you lose, but you won’t. Seen this shitty movie too many times.

Gonna be some great games!!! Eagles and Vikings will put up a fight. Same with Bills against Houston. Maybe this is the year of the under dog.

Officially back: the Texans have activated DL J.J. Watt to the 53-man roster and he will play on Saturday, per source. The team placed starting S Tashaun Gispon on IR to make room for Watt.
AlmostOldGuy December 31, 2019, 11:20pm #11

Here are the current odds from betvega.com. I assume these are the payouts for a $100 bet. 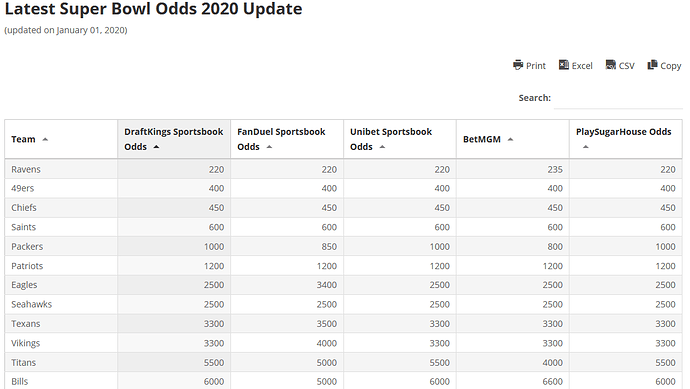 I would put saints ahead of 49ers. But since they beat the Saints I guess it makes sense.