Edelman, 33, jumped on the hood of a vehicle on Saturday at approximately 9 p.m. PT, causing damage, police said. After the arrest, he was later released by police. In a statement, police said that Edelman is scheduled to appear at Airport Courthouse on April 13.

Edelman is from Redwood City, California.

Edelman, who was named Most Valuable Player in Super Bowl LIII, was the Patriots’ leading receiver in 2019 with 100 receptions for 1,117 yards and six touchdowns.

He had played through shoulder and knee injuries and was recently named the team’s 2019 Ed Block Courage Award recipient.

A lawyer’s analysis of possible repercussions: 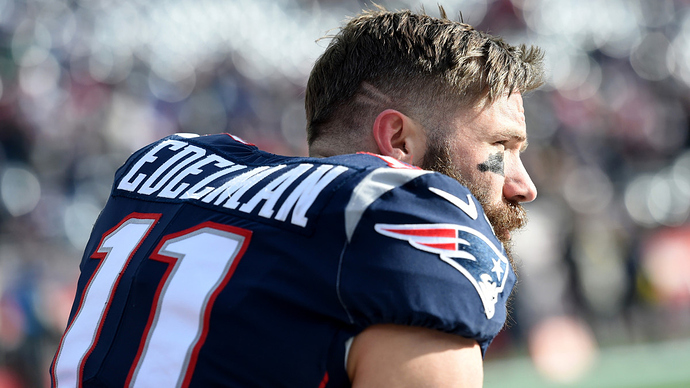 While it’s unlikely Julian Edelman will face significant legal repercussions for his vandalism arrest, what will the Patriots or the NFL do?

Hell, he took a page of my current 47 year old playbook.

So … what’s the proper term for a gang of rest home bullies? Senile delinquents???

Nah, I’m just kinda badass. Just ask me. Nobody else just me.

I think JE is taking a page out of AB’s playbook and is trying to shoot his way out of town.

Have you ever known me to joke around?

Blast from the past.