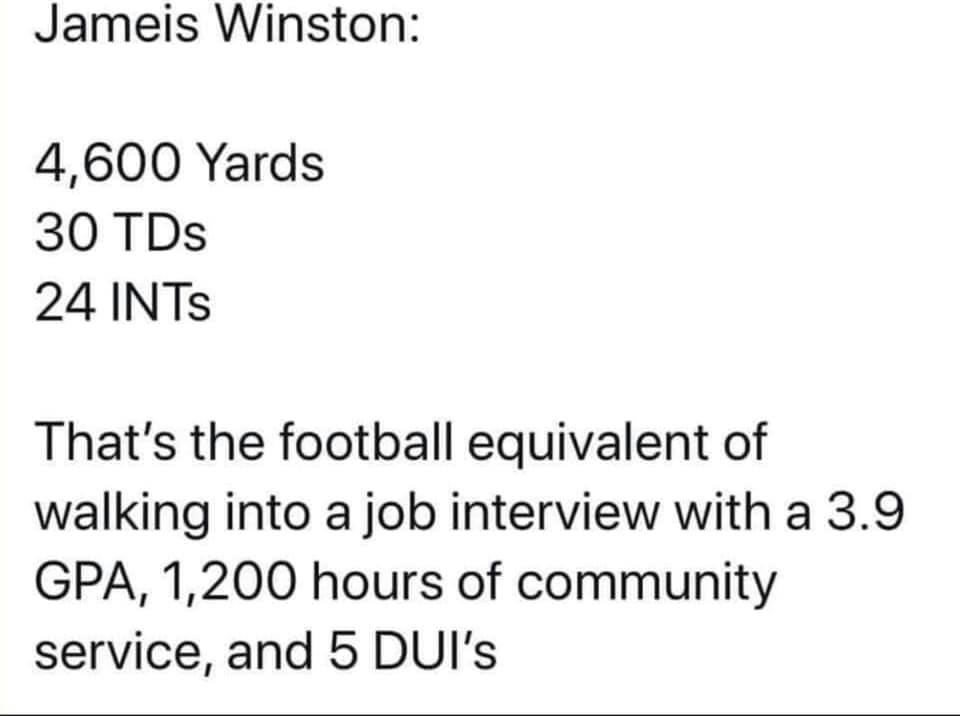 no way he gets it, he is way to inconsistent for any team except the Jags, they may…

Lmao bahahahhaha Ya sure you’ll get that. 28 interceptions and yet to take your team to the playoffs. Give me a break!!! He puts up a lot of passing yards but that is about it. When the game is in the clutch, and he needs to step up he fails. He isn’t a terrible QB and I do think he can get better but no way a team signs him to say a 5 year 150 mill. Just won’t happen

I wonder if the NFLPA would allow Jameis to sign a contract that starts out at $30M per year, but then subtracts $1M for each INT he throws, up to a maximum subtraction of $25M (or equivalently, a minimum salary of $5M).

Both sides could agree to hire an independent expert to review videos of the INTs, and cut Jameis some slack on those that were caused by a receiver who should have caught the pass, but bobbled in the air for a defender to easily pick off. If they went down that road, though, the same arbitrator would have to subtract $1M for each time Jameis threw one straight to a defender, only to have the defender drop the easy INT because, well, he’s a defender.

This could get complicated …

To throw even more complication into mix, what would be the Salary Cap implications of such a contract?

Lol!!! That legit would be awesome! If he lost a mill per interception he would be bankrupt bahahahah

You do that and he would run more than Larry Johnson did in 2006.

Lmao, NFC Lamar Jackson except not even close to as entertaining.