About a year ago I stumbled upon an article about fermenting peppers for hot sauce. For whatever reason the subject instantly fascinated me. So for the last year I’ve been reading a ton about fermenting, and today I finally made my first attempt. Sauerkraut seems to be a spot most experienced fermenters advise newbies to start.

And so today I finally took the plunge. 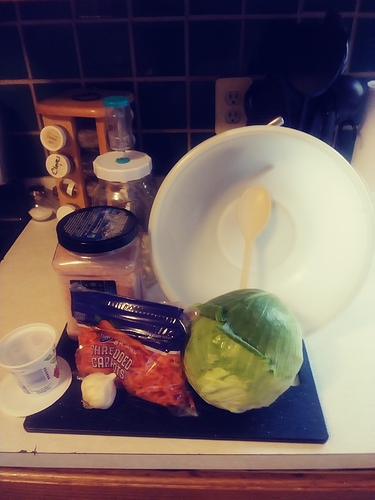 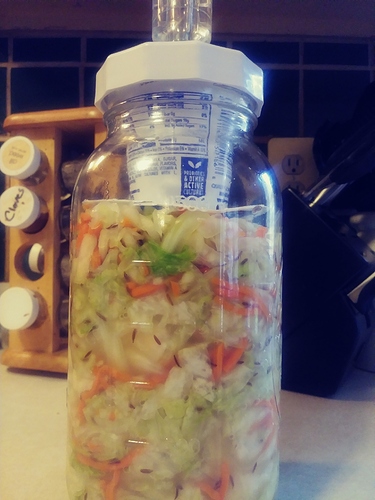 Its got to ferment for around two weeks. Then its Ruebens and brats as far as the eye can see

I started lacto fermenting a few years ago. I am about to do a batch of pickles. Sauerkraut is pretty easy just make sure everything stays below the brine!!

Cool I want to try some pickles too. And hot sauce. 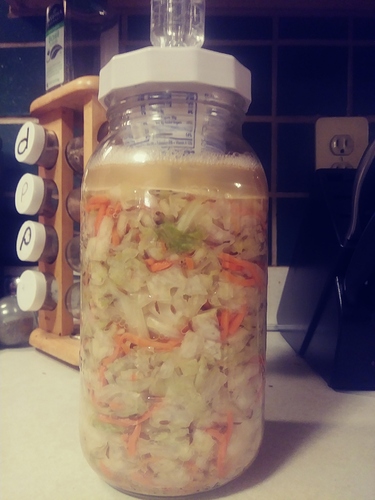 The pickles sound good but I am not a big Sauerkraut guy but my kid eats is over his friends house (Wild Chek family) so maybe I should try it again.

I have this book on my kindle, it’s pretty good 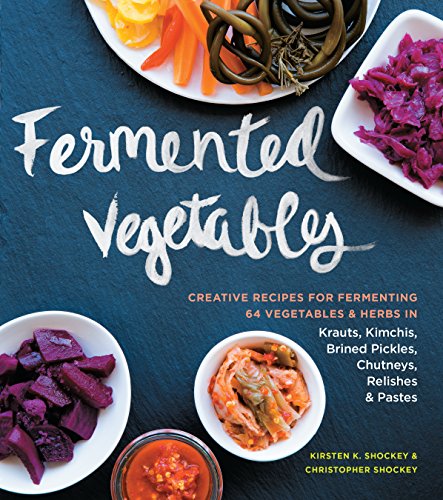 Ive been reading a lot on this site:

and specifically this thread:

Page 1 of 59 - Fermenting Peppers 101 - posted in Hot Sauce Making: Ive had so many requests for this I thought it would be easier to make a thread of it. Chili Monsta and I put it together and tried to cover as much as we could think of to cover. If...

It’s not really fermenting or pickling, but I love half sour pickles.

Day 8. I was a little worried around day 5 or so, as the brine seemed to be receding. But since then the cabbage seems to have settled some and there is a good 1/4 to 1/2 inch of brine on top. No mold or yeast. I’m pretty stoked that it seems to be doing what its supposed to. Shooting for a 2 week ferment. So hopefully next Tuesday its Ruebens. 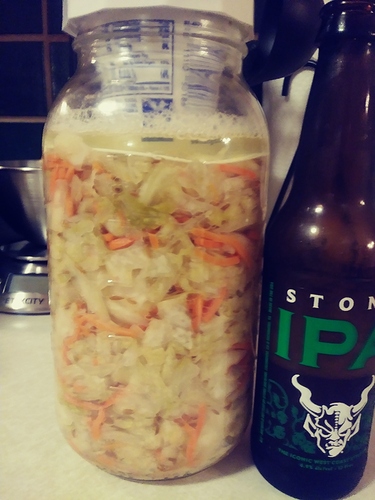 Nice, what are you using for your weight?

Ive seen online some people use those decorative glass pebbles and that seems like a decent idea. It would allow you to customize the amount of weight/space for each jar. I might try that next time.

Yeah I have these

https://www.amazon.com/Pickle-Pebbles-PLUS-Fermentation-Small-Batch/dp/B00V41EZNC still need to put like a leaf of cabbage on top of the fermented vegetables and then put the stone on top of the cabbage leaf.

Yeah one of the guys who posts a ton at that hot sauce forum uses the cabbage leaves to top all his ferments. He doesnt put anything on top of the cabbage leaves, just adds a packet or two of Culturelle probiotics to really kickstart the ferment. His theory (as far as i understandi it) is that if he gets the ferment kicked into high gear as fast as possible, the C02 that is released pushes the oxygen out thru the airlock before the mold can set in on the cabbage. And once the oxygen is gone, mold cant grow.

Of course he lost two jars of fermenting mash just as i was gearing up for this attempt. He claims its the first time he’s ever lost jars to mold, and he says he’s done like 40 batches. It kind of freaked me out, so i didnt put thecabbage leaves on top. So far, it seems to be doing ok.

Had a bit of a scare a couple of days ago. Woke up Sunday morning and the cabbage had expanded above the brine level. So I had no choice to open it up and push the cabbage back down. Today is day 14 and it seems to have survived me opening it. The brine is murkier than it was pre- push down. But so far so good.

Murkier doesn’t sound good. I’d research that before eating it and I would start with a small bit of it just to be safe if I ate it at all. Good luck

Been researching it for a year. This is my first attempt. No mold, no yeast. Everything is fine.

Day 15. I actually just opened it again. I noticed a couple of small pieces stuck to the jar above the brine line . So I opened it and wiped it with a paper towel. 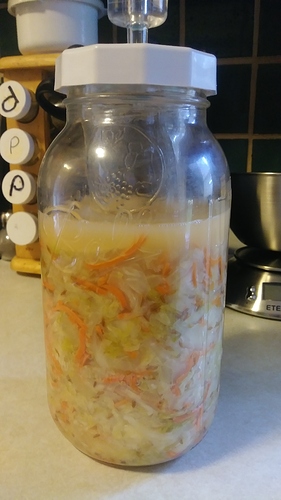 I just realized I never posted what I put in this ferment.

Anyway I ended up stopping around day 17. The kraut was much crunchie than I expected. It was also VERY garlicky. Next time ill cut back.

I used half of the kraut in a recipe I found. First I sliced about 2 lb of kielbasa and browned it in a frying pan. Then I simmered the kraut, a chopped onion and half a cup of brown sugar in the same pan for about 45 min. Then I chopped 5 medium red taters and added them, popped the whole thing in the over for about 30 min. Everything caramelized perfectly. And I thought it was delicious. The Mrs doesnt like kraut so she gave it a meh. 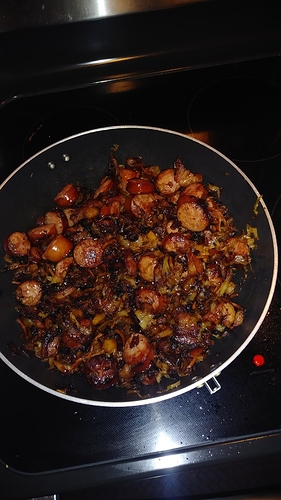 I used the other half a few days later and made some corned beef, swiss and kraut sliders on Hawaiiian dinner rolls (served on high class paper plates) 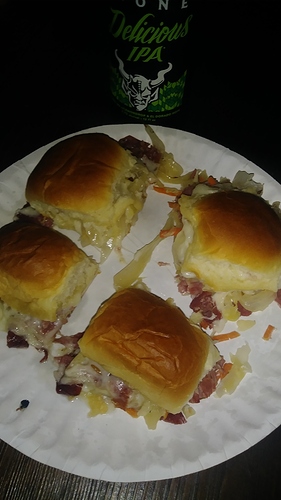