A couple of chicken meals worth of bones, 5 or 6 wilty and forgotten stalks of celery in my veggie drawer, 2 onions who had seen better days, a bunch of parsley, half a bag of oldish baby cut carrots, a few bay leaves, a spoonful peppercorns, some thyme and enough water to cover it all lovingly rendered down over the course of 15 hours in my crock pot. 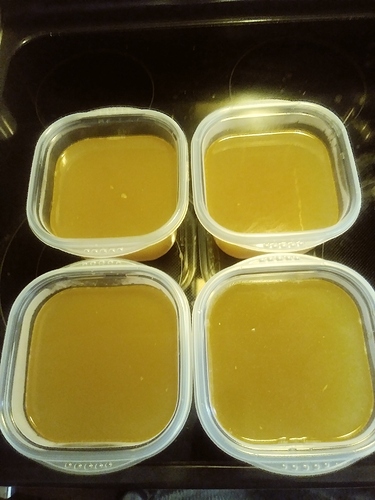 I’m not a multi billionaire like our Angry Clown Deity so I have been trying to pinch pennies where I can and I made 12 cups or so of this liquid gold. Would have cost 8 or 10 bucks in the store. All I bought specifically for this was the parsley which cost me 99 cents.

Thep Almet Completely Amatuer Cooking Tip: Use chicken stock instead of water when you make rice. The subtle chickeny taste is wonderful and the silky texture of the stick jazzes the rice up to another level.

I have a Brother who is really good at making meals out of whatever he finds in the cupboard and refrigerator, as long as neither are completely bare.

If there isn’t a show called Scrap Food on the Food Network, there ought to be. It could show single people how to make decent meals out of things they would normally have on hand. I mean, I don’t normally keep caviar, saffron, and Kosher Dead Sea Salt around for daily use.

I wonder if Richard Dean Anderson can cook. I mean, who better than the man who played MacGyver to host such a show? Maybe he wouldn’t even have to cook … maybe he could have a different guest cook every week showing him how to make a 5-star meal out of Cheerios, beer, slices of bologna, ramen noodles, and hot dog mustard.

That’s a pretty good idea. Stock is such a easy way to raise your cooking game. Something as simple as using it instead of water when you cook rice can make you look like a much better chef than you really are.

I use stock often making rice, you are correct it is a big boost to the taste.