Delonte West is under arrest

Man, has this guy fallen.

Speaking as someone who has witnessed a close family member do his very best to burn his life to the ground over the last couple of years due to a substance abuse problem that is just really really sad.

I hope someone somewhere can hook him up with the help he obviously needs.

And of course one of the biggest obstacles is that you can’t make someone seek treatment if they don’t present a danger to themselves or others. All the money, influence, connections and famous friends in the world can’t get him help if he doesnt agree to be helped.

Wasn’t Delonte hooked up with Lebron’s mom for a while when he was in Cleveland?

And the last thing I knew was he had big prison time ahead of him for gun and drug charges but my memory may be failing me.

Don’t know about Lebron’s mom but this from Wiki about the gun charges:

“On September 17, 2009, West was pulled over for a traffic violation while riding a Can-Am Spyder three-wheeled motorcycle. During this stop, it was found that West had a 9mm Beretta pistol in his waistband, a Ruger .357 Magnum revolver strapped to his leg, and a Remington 870 shotgun in a guitar case across his back. He was subsequently arrested and had a court appearance on November 20.[24] His trial was scheduled to be heard on February 18, 2010,[25] but was postponed until July 21, 2010.[26] West pleaded guilty to the traffic and weapons charges and was sentenced to electronic monitoring, unsupervised probation, and 40 hours of community service as well as psychological counseling.” 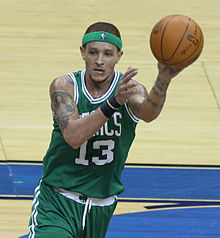 Delonte Maurice West (born July 26, 1983) is an American former professional basketball player who played in the National Basketball Association (NBA) for the Boston Celtics, Seattle SuperSonics, Cleveland Cavaliers, and Dallas Mavericks. He also played professionally for the Fujian Xunxing and Shanghai Sharks of the Chinese Basketball Association and the Texas Legends of the NBA G League. Prior to playing professionally, West played college basketball for Saint Joseph's University. West went ...

DeLonte was banging LeBrons mom, and shouldn’t LeBron help out his stepdad?

We all witnessed LeBron James ' epic collapse in the 2010 Eastern Conference semifinals. We watched as he shot a combined .340 from the field in the final three games...