I’ve been telling y’all this since the preseason when everyone, including and especially the local guys were claiming they wouldn’t win 25
games this year after losing the POS that is Kyrie and Average Al.

How’s that working out for ya.

This team is just too deep and too well coached with some supreme talent but this team, this team has heart.

Kemba is the sane team player that Kyrie will never be and Heyward coming back has been huge even though he missed this series.

Wrap it up tonight and let’s take this thing. 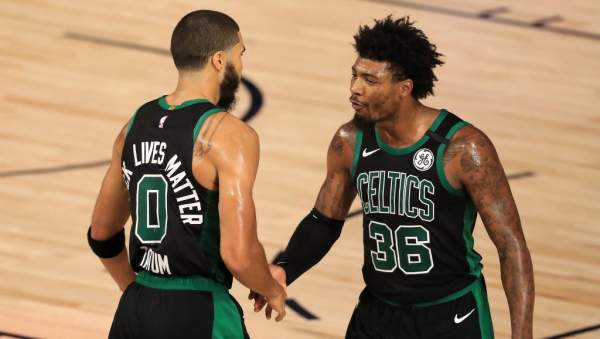 The NBA world is once again starting to take notice of the Boston Celtics. After Boston leaped out to a 6-0 postseason record after grabbing a 2-0 lead in their best-of-7 series against the Raptors, it dramatically increased its chances of winning...

They look good man. Killed Toronto. We will see what happens in game 6

ainge is a pretty decent GM

Raptors win in heart attack fashion. Game 7 it is

Great fucking game. I’m only at the beginning of double over time on the recorded game. These cats, 2 on either side have been playing the whole game and lighting it up. Wow. They must be exhausted.

Oh Man no kidding. You can see how exhausted they were after the game. What an epic battle. Friday should be amazing. I truly think we are looking at the two best teams in this conf. No disrespect to Miami, they are very good too.

Celtics should have won last night, not blaming the ref’s for the calls because the team blew a lot of plays.

I had issues with Tatum throwing a pass to the opposing coach who was clearly on the court.
the non call on Walker
the call on Theisis
Brown going MIA in the second half.
the 30 second 9 point allowed to one player.

It was a loss that should have not happened.

To be honest, once the raptors were down 12 I thought it was over. Surprised there was a comeback.