Chung was 10 miles from Partying when he got popped on Memorial Day weekend.

It appears the Patriots defense is about to receive some bad news as it was released today that Safety Patrick Chung was busted for possession of cocaine at Weirs Beach NH back in May.

According to the Laconia Daily Sun: New England Patriots safety Patrick C. Chung is scheduled to be in Belknap Superior Court next Wednesday to be arraigned on a charge of cocaine possession.
A Belknap County grand jury indicted Chung, 32, on the charge on Aug. 8.
A highly placed law enforcement source confirmed the person indicted and the football player are the same person.

Chung “did possess or have under his control a quantity of the controlled substance cocaine” on June 25 in Meredith, according to the indictment. When asked for a booking photo, Meredith Police Chief Kevin Morrow said Chung “was not arrested and there is no photo to provide.”
The details surrounding Chung’s encounter with law enforcement were not clear in the indictment.
The indictment lists Chung – who signed a contract extension in April and has won three Super Bowl rings with the Patriots – as a resident of Meredith.
Town records show that Patrick Chung owns a lakeside residence in Meredith.

No word yet from the Patriots but at the least Chung is certainly facing a suspension.

Hearing now that it was in June and he was indicted August 8th.

EEI is saying it happened when police checked an alarm at his house and entered the property when he wasn’t home.

That was my first thought as well.

Statement from the New England Patriots: We are aware of the reports regarding Patrick Chung. We will not be commenting while his judicial proceedings take place.
2 Likes
TheEvilPrince August 22, 2019, 5:51pm #6

I hope you don’t mind, but I stole this comment to re-tweet about it. retweet? Twat? Twatted? retweeted? Whatever.

no problem, it wrote itself.

Hearing now that it was in June and he was indicted August 8th.

EEI is saying it happened when police checked an alarm at his house and entered the property when he wasn’t home.

Not to get all Philadelphia Lawyer, but isn’t this illegal search and seizure?

The charges against #Patriots S Patrick Chung have been resolved, per the Belknap County Attorney. But there are several conditions, plus Chung now awaits NFL Discpline. https://t.co/7KQQujwce8 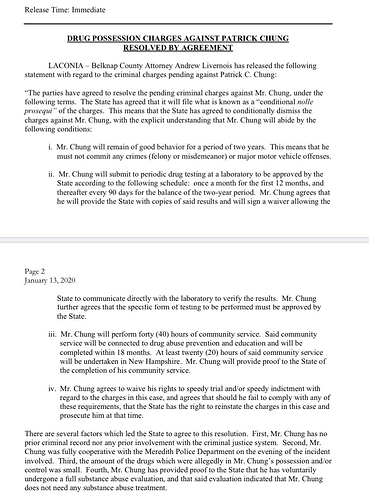 This happened right near me at Weirs Beach.

Having looked into the specifics when this all happened I was pretty sure this would be the outcome.