Just finished the Sopranos for the second time cuz Jo had never seen it. Phenomenal. She loved it.

I watched it the first time with the true love of my life, Melissa back in the day. Great memories, great show.

Onto Ozark, I think. Then Dexter.

Never heard of the feed. Hmmmm

No binging for those of us who have “Essential Worker” Papers.

Watching ‘Killing Eve’ on Hulu, though I think its a BBC show. And may also be on AMC. 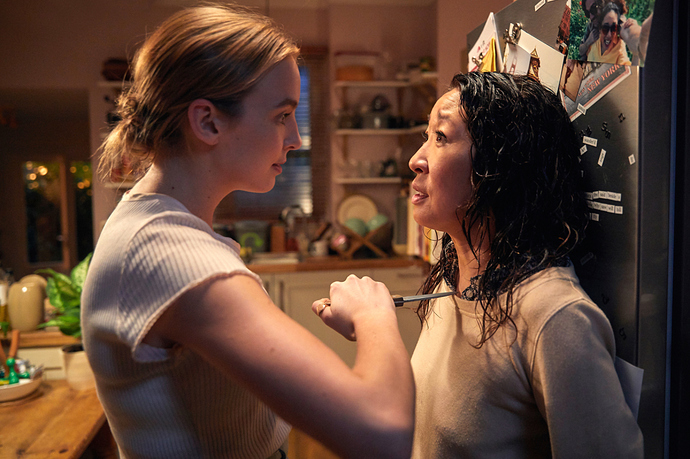 Eve’s life as a spy is not adding up to what she had hoped it would be when she started. She is a bored, very smart, MI5 security officer who is very desk-bound. Villanelle is a very talented killer, mercurial in mood, who clings to the luxuries of her job. Eve and Villanelle go head to head in a fierce game of cat and mouse, each woman equally obsessed with the other as Eve is tasked with hunting down the psychopathic assassin. Sarah Barnett, BBCA president, says, " `Killing Eve’ stands out in a sea of scripted stories as refreshingly entertaining and great fun."

Space Force season 1. Its a new show produced by Steve Carell and the former showrunner if The Office. Think American Dad (with no Steve or Roger and Maxine is in prison) meets Orange Is The New Black meets Armageddon.

I think it was ten 30 min episodes. Its getting lambasted by the critics for not being funny.

What this show wasn’t, thankfully, was 6 hours of Trump is Dumb jokes. Yeah they take a few minor shots at him and other politicians (Nancy Pelosi and AOC mostly) but they are mostly tame and really feel like they were checking off a box. I don’t like preachy shows or shows that try to ram politics down my throat and I never got close to feeling that.

IMO there were funny moments. Not a lot. But enough. There were also some things that were meant to be funny that weren’t. But the genius of The Office or a show like Parks and Rec wasn’t setup - punchline - laughtrack. It was humor that flowed from the critical mass of the characters personality that built up over seasons.

I can give Space Force some time to build that up.

My main issue with the show was actually the pacing and how disorganized the show seemed at times. I was pretty amazed how rushed it all felt. Its like they had 15 hours worth of ideas that they crammed into 6 hours of actual episodes. There is some lazy writing. Threads were just left dangling. Major details are left unexplained. How Lisa Kudrows character ended the season finale was just dumb.

All in all the show has some pretty big flaws, but also some promise. The cast is spectacular…Carell, John Malkovich, Lisa Kudrow, Noah Emmerich to name a few. I can’t think of any of the main cast that gave a weak performance.

I will tune in for season 2, which apparently already been greenlit.

I watched Season 1 of Killing Eve and really enjoyed it. I will get around to season 2 at some point.

Started sons of anarchy on Netflix and just finished season one. Went to watch season two and they only have the first season so far!!! AAAAH. ANGRY

Watching ‘The Boys’ on Amazon. Not what I expected and I like the potential darkness of it.

The Boys is great. Season 2 should be starting soon I think?

Just finished the first 4 seasons of The Magicians. I was always reluctant to watch it because the commercials made it look like a bunch of bathing suit models in a Harry Potter wannabe show.

What it actually is Narnia on crack. Dark twisted and downright gory at times. Lots of sex drugs and rock and roll. More babyface/heel turns than the WWE. But it is also a show that doesn’t take itself too seriously. The writers weren’t afraid to drop a bad pun or be outright silly at times. Its a show that probably shouldn’t work. But it does.

Sons of Anarchy. On season two. So damn good

Just watched Star Trek: First Contact in my binging of ST to lead up to watching Picard

In season 3 of VGR and season 5 of DS9, watching them all by air date order.

If you’re not into that… That 70s show is funny. They put the packers helmet on and call it the idiot helmet haha

We just finished the most recent season of Ozark and just wow. Great show.

Watched the first 3 episodes of the Netlfix docuseries on Waco last night as well.

I have been fully awake to philosophical, religious and a bit later political issues since I was 12, 36 years ago so I remember this and Ruby Ridge clear as day.

The dramatizations of those involved on all sides are terrific. Horrible but well done.

Finished Waco last night. The final episode with all the women and children trapped inside, burning was brutal but brought something very real to the table.

I was heartbroken and in tears once again like I was when it happened when they announced the 25 dead children.

Started After Life with Ricky Gervais last night. After a bit of a tough opening it really is wonderful and quite against the mainstream PC BS as one would imagine with Ricky in it.

These people are British, and their slang is different. After watching for a couple of weeks a word that’s no big deal in Britain, but a VERY big deal in America started to work it’s way into my everyday vocabulary, especially while driving.

Yeah, that word drives Jo nutz so I think she’ll have a little trouble with the show at first. It used to be a small part of my vernacular in appropriate company then Jo came along and it has worked its way out mostly.

I totally got used to it while watching Game Of Thrones.