Got home about midway thru the 2nd period 2-0 Blues and the Bruins were promptly inspired to tie the game up.

Is this three stars thing something theyve always done?

Yes. They pick 3 stars at the end of each game; I think that’s NHL wide.

Weird. I don’t ever remember seeing it until this season.

That’s my problem. Even with my glasses I can’t see the puck.

If you haven’t been watching hockey for a while, the trick is to forget about the puck and to watch the players. Eventually, your brain subconsciously learns where to look for the puck.

Eventually, your brain subconsciously learns where to look for the puck.

LOL @ all the comparisons between Zdeno Chara and Monty Python’s Black Knight, after Chara needed stitches for taking that Terasenko shot off his forearm. 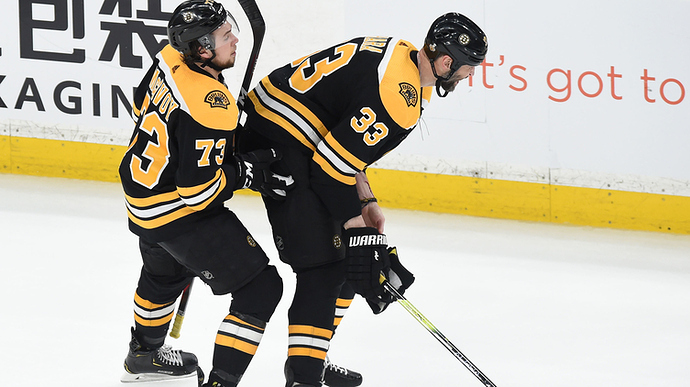 Chara 'fine' after getting bloodied on block

Zdeno Chara suffered a wrist injury late in the Boston Bruins' victory over the St. Louis Blues. While he needed stitches to repair the cut, the forward said that he should be fine.

Congrats folks. That was a thorough beat down!

the league is using it as a marketing device to get the helmetless faces on TV as the players give away sticks to kids. they have done it for as long as I’ve gone to games, over 45 years.

Did they just start televising it this year? I swear I’ve never seen it until this season.

I think they would name them but I dont recall seeing it on TV like this - could be a playoff move.

That where I watch Rugby and Lacrosse.

Make another sandwich to make it 3-1.