What movie do you regret ever watching because it was so disturbing?

Plenty of movies have some things that were disturbing to me, but I don’t think I ever regretted watching one because of its disturbing contact. Usually it is more because it was a bad movie and a waste of time.

Any that you regret seeing because of the disturbing content?

For me, its gotta be that home movie you sent me a couple of years back…

No but fo real tho, i was pretty traumatized by watching the original Friday the 13th when i was like 10 years old. Now i avoid anything with a tone above “suspenseful”.

i have say it when i watched faces of death tripping on acid.

I very much regretted watching The Room.

At the theater. I was 10…far too young to be exposed to the horrors of disco.

Nah man no one should ever regret watching that one. It’s a masterpiece!

In some ways, I regret watching this one, mainly because it is hard to scrub the image of a leather-clad, very hairy Sean Connery from your eyes, but this flick is so bizarre, I am not sure how it ever got made, why it got made, and why Sean Connery agreed to do it. 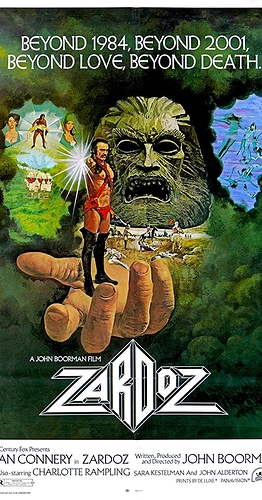 Directed by John Boorman. With Sean Connery, Charlotte Rampling, Sara Kestelman, John Alderton. In the distant future, a savage trained only to kill finds a way into the community of bored immortals that alone preserves humanity's achievements.

When I was a kid my dad watched some movie the title if which I do not remember in which a old. 1930s era plane like a crop duster crashes and the pilot is trapped and fire is starting to burn him and the pilot is begging for help and there is a crowd just all stsnding around watching him suffer and the main character I think grabs an axe handle and bludgeons him unconscious so he won’t die in agony. That very much disturbed me. Even now if i watch a scene where someone is begging against imminent death it makes me cringe a little.

The Faces of Death series absolutely and Pieces. Chuckie as well.

‘The Faces of Death’ Wow! That’s a blast from the past. I specifically remember the eating monkey brain while still alive scene.

I certainly don’t regret seeing it, but one of my favorite horror movies is ‘Halloween’ (1978). On a 300K budget, scary done right.

I certainly don’t regret seeing it, but one of my favorite horror movies is ‘Halloween’ (1978). On a 300K budget, scary done right.

I am pretty sure I saw a trailer recently about bringing the original back in an authentic sequel, complete with Jamie Lee Curtis.

I am pretty sure I saw a trailer recently about bringing the original back in an authentic sequel, complete with Jamie Lee Curtis.

I’m going to start a thread titled What thread do you regret posting in because it was too disturbing.

Welcome to the planet!!!

We went to see The Purge on Wed and saw the trailer for it.