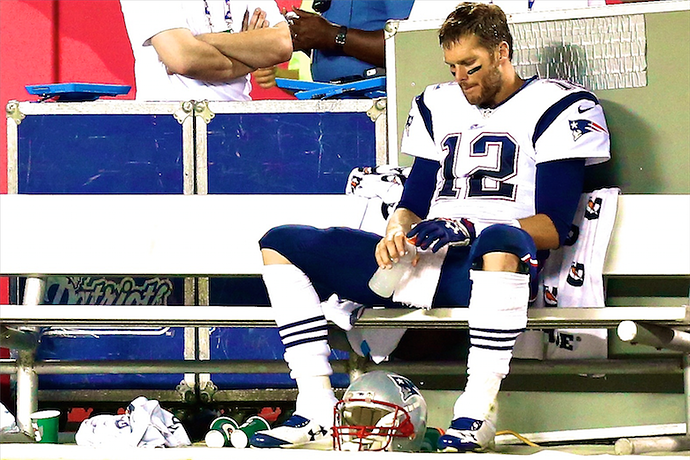 So this is how the New England Patriots dynasty dies: with thunderous applause. With apologies to Star Wars ' Emperor Palpatine , Patriots head coach Bill Belichick is the most feared hooded ruler in American entertainment...

So this is how the New England Patriots dynasty dies: with thunderous applause.

Their failure was so complete, so embarrassing, that it’s hard to see any way they’ll win more games than they lose—let alone collect their usual division title or represent the AFC in the Super Bowl again.

With 37-year-old quarterback Tom Brady playing the worst football of his life, behind an offensive line that can’t protect him, across from a defense that’s the antithesis of Patriots football, the awful conclusion is inescapable: It’s over.

If Belichick is Palpatine, then Brady’s Darth Vader, the right-hand man who does all the dirty work. Just like Vader’s infamous mask and cape, the sight of Brady in big games used to strike fear into the heart of opposing defenses.

Brady used to dominate the NFL no matter who was on the field, with him or against him.

On Monday night, he completed just 60.9 of his 23 passes for a meager 159 yards, one touchdown, two interceptions and a lost fumble. The touchdown, however, came late in the third quarter and only cut the Chiefs’ lead to 27-7. The interception was a brutal pick-six that earned him what might be the first performance-related benching of his professional career:

“When I suck,” Brady told WEEI before the season (h/t Boston.com’s Steve Silva), “I’ll retire.” On Monday, Brady sucked. Of course, he wasn’t the only one.

The offensive line, and especially left tackle Nate Solder, has had a miserable season, and it didn’t do any better against Kansas City. Pro Football Focus (subscription required) had the Patriots ranked dead last in the NFL in team pass blocking—that was before Chiefs pass-rushers Justin Houston and Tamba Hali combined for nine solo tackles, an assist, three sacks and two forced fumbles, per NFL.com.

Any quarterback would struggle in the face of that kind of heat. Brady used to be the best in the business when it came to staying cool in the pocket, and at no point this season has Brady looked anything like the unflappable guy he used to be. The 6.0 percent sack rate he carried going into Monday Night Football would be his worst since 2001, when he first stepped in as starter.

The bottom line: Brady is no longer a difference-making quarterback. He can’t save the Patriots’ season without help, and it’s hard to see where that help will come from.

It certainly won’t come from the defense.

As wonderful as Brady was throughout the 2000s, the great Patriots teams of the Belichick dynasty have always been powered by their nasty, swarming, all-for-one-and-one-for-all defense. Remember the “Next Man Up” mentality?

The next Patriots defender who steps up this season will be the first.

The Chiefs offensive line lost both starting guards from 2013 in free agency this spring and is anchored by a tall, lean left tackle who entered Week 4 as Pro Football Focus’ worst run-blocking offensive tackle.

Nevertheless, it blew the Patriots’ front seven off the ball down after down. Tailbacks Jamaal Charles and Knile Davis combined for a whopping 199 yards and a touchdown on 34 rushes; they averaged a Jim Brown-like 5.86 yards per carry.

The Patriots made oft-maligned Chiefs quarterback Alex Smith look like, well, Brady at his Hall of Fame best. Smith completed 76.9 percent of his 26 attempts, averaged a fantastic 9.54 yards gained per attempt and threw three touchdowns without turning it over.

When the Miami Dolphins trounced the Patriots in Week 1, the situation was critical. When the Patriots struggled to beat the hapless Oakland Raiders in Week 3, things took a turn for the worse. In Week 4, the Dolphins blew the doors off Oakland, and the Patriots coded out.

Falling to 2-2, tied with the Dolphins and Bills on overall record and just one game ahead of the New York Jets in the AFC East, the Patriots’ season is already on life support—and their dynasty is dead.

Whether or not Belichick can will the Patriots to keep their heads above water in a mediocre division of a weak AFC, they’re looking hard at a full rebuild on both sides of the ball.

No matter what team you root for, take a second to applaud Belichick, Brady and all the fantastic Patriots players and teams who’ve been so very good for so very long, indeed. Not only were they the team of the 2000s, but they were halfway to being the team of this decade as well.