The Life and Times of Thep Almet

-from The Life and Times of Thep Almet, volume 4

…and so it came to be that ThepAlmet awoke that fateful morn and strode with manly confidence into to the kitchen of his humble castle. The female-folk already there were all abuzz, speaking in amused, but appropriately hushed whispers behind discretely placed hands, as women are wont to do.

The energy of the room was palpable. Of course being who he was, Thep was used to his arrival sending waves of excitement crashing through assemblies of persons both big and small. But even so, this seemed different to Thep’s keenly tuned senses. Something had happened. Something big. Something monumental.

Thep stopped the Lady of the castle, the beautiful and talented Mrs Thep, and asked her what had everyone so agitated so early this fine morning. The Lady smiled a most intoxicating smile, and said," Come husband and see what you have wrought." She took him by the hand and led him to a low counter where several small containers were arranged.

Thep dared a thought. Had it happened? Is it possible?

In the small containers was soil. Soil that Thep himself had packed into the containers with his own bare hands. Thep was a gentleman, but he was not above dirtying his hands with common work. A man should keep himself busy. Thep was no stranger having sweat upon his brow.

But now he hesitated. It was not something Thep did often, but in this he was momentarily uncertain. It was such an ambitious endeavor. Was one man enough? What if it didn’t work?

A moment of self reflection. Not fear. A true man should be able take stock of himself at any moment. Even now. No, Thep was not afraid. And he would not fail.

And in the center of most of the containers a fragile green shoot had emerged from the soil.

Thep was overcome, and sank to his knees. Tears came, involuntarily, and he raged joyously.

" I HAVE BEATEN YOU DEATH! I HAVE PIERCED YOUR INCOMPREHENSIBLE VEIL AND SNATCHED LIFE FROM YOUR BONY HANDS AND PUT IT FORTH UNTO MY LAND! I HAVE CONSPIRED WITH JALA THE GOD OF VEGETABLES AND PENO THE GODDESS OF ALL THINGS SPICY AND DRIVEN YOU BACK TO YOUR ACURSED LAIR!!! I, THEPALMET, HAVE SINGLEHANDEDLY BREATHED LIFE INTO EXISTANCE WHERE BEFORE THERE WAS NONE!!! I DUG THE DIRT!!! I PLANTED THE SEED!!! I WATERED THE SEED!!! I GAVE LIFE PURCHASE ON THE SILL OF MY SOUTH FACING WINDOW AND YOU WERE POWERLESS TO STOP ME!!! BEGONE DEATH YOUR GRIM POWER NO LONGER HOLDS SWAY OVER MY KINGDOM!!!

And then Thep went and posted about it on social media.

TL;DR
I planted some jalapenos. And I’m pretty stoked. 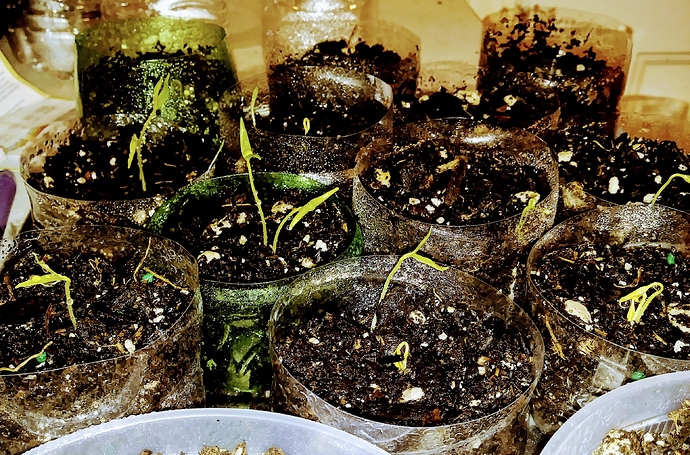 Coincidentally, my wife and I (well, mostly her) have started exploring hydroponics this weekend. We have containers and drill bits and all matter of material to get started.

Congrats on your success!

The seeds have been planted to get them started - lettuce, cucumber, and cherry tomatoes.

Not much to see yet, but I took a pic.

I started out low budget. I’ve never tried anything like this before. One of my wife’s co workers gave her a packet of seeds, and I cut the bottom off the a bunch of water bottles to start them in.

Wife just told me her mother has a bunch of unused plastic containers I can use when they get big enough to transplant.

I figure start slow and cheap. If it works out I will expand

I want to get some herbs growing too. Definately basil. Maybe some cilantro, although I’ve read that’s sort if high maintenance.

Yeah our supplies once they germinate are plastic buckets from Lowes. We will drill holes into the lids and then the plants go in little cups in those holes. The buckets will be filled with nutrient dense water. No soil used. It will be interesting, we’ve never done something like it before.

Look at us. Farmers.

I would have thought that being a clown, all your buckets would be filled with confetti.

This time next year you’ll have 20 plants in a hydroponic grow in the basement.

I don’t have a basement.

Hopefully it won’t be the only way to get fresh vegetables this time next year.

Congrats!! I am trying my hand at heirloom Tomatoes, cherry tomatoes, basil, cilantro, rosemary, sunflowers, peppers and string beans. Also a bunch of flowers with my daughter that I have no clue what.

The sunflowers have popped so I hope to start seeing others soon. I figure I’ll try it now in pails as we are starting to prepare to house hunt next January.

I’m down to 6 seedlings.

I dropped one and the cats got two. A few others grew up and then fell over. One may have committed suicide, but the investigation is still ongoing.

I decided to accelerate the process and just bought some Bonnie plants. Its possible I got tired of Dan at work telling me how great his garden is doing. The containers my brother gave me are huge so I decided to just go whole hog. I have jalapenos and basil in containers now with habenero, bell peppers and grape tomatoes left to transplant. Mint in the medium sized containers. I read it might help keep away the bugs and critters. 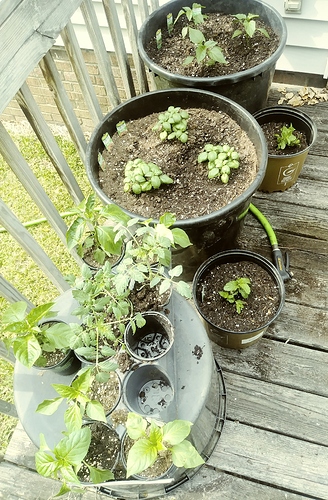 Built me a tomato cage yesterday. Because that is something us tomato farmers do. 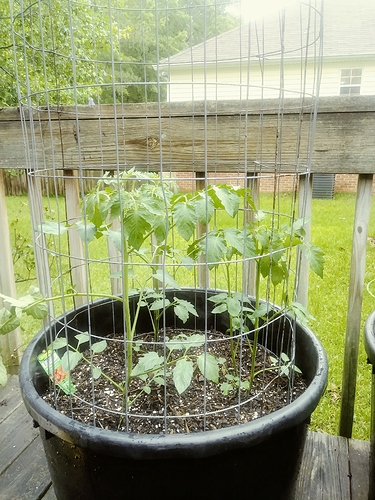 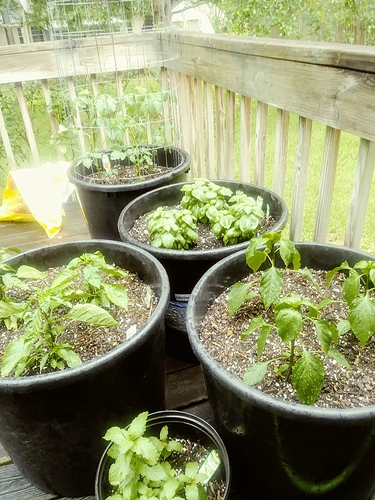 I tossed all but one of my seedlings. They just stopped growing and I didn’t see any point in continuing. I might try again next winter but to be honest buying the plants ready to transplant was pretty easy.