Red Sox exec on Mookie Betts: 'If he wants to stay in Boston, we'll pay him'

Many expect Betts to get “Mike Trout money” if he hits the open market following the 2020 season, so it makes sense the 26-year-old doesn’t expect to sign a contract extensionwith the Red Sox between now and then. However, it appears Boston is willing to shell out the cash for their star right fielder.

Peter Gammons notes in a recent column for The Athletic that according to one anonymous Red Sox official, the organization is willing to pay the hefty price for Betts, but he hasn’t shown mutual interest in working out a deal.

“If Mookie wants to stay in Boston, we’ll pay him,” says one Sox official. “We want him to be the face of the franchise. But it’s hard to know. He’s rejected our outreach in the past. We have to know if he’s open to signing a year before he hits free agency at the end of next season.”

The timing of this tidbit coincides with the recent report the Red Sox may listen to trade offers for Betts this offseason.

While the idea of trading away a player of Betts’ caliber may leave some scratching their heads, the Sox front office may be left with no choice. They can’t afford to let Betts walk and get nothing in return, so it could be the only sensible option left on the table if he’s unwilling to commit long-term.

Betts isn’t the only Red Sox star we’ll have our eyes on in the coming months as fellow slugger J.D. Martinez will have to decide whether to exercise his opt-out clause at the end of the season.

Betts was a last minute signing after being drafted, the Sox offered 400K but he said 750K or college. The last day the sox paid him, no negotiations.

Then he wanted more before Arbitration and once they didn’t offer more he said just re-up me (it helps his arbitration later) again no negotiation.

The in Arbitration he again came in with a number, refusing to budge, no negotiation.

That said is it smart to put 40 million per into one Mookie or two JD Martinez?

Well I like mookie so I am ok with this. But unfortunately we will have to let a couple guys go to get some money somewhere. We still need pitching. Another starter and at least a couple relievers.

To think I saw this guy play for, like, seven dollars back in the Arizona Fall League.

Oh wait, same story for Trout. And I actually talked to Trout, briefly.

never got to do anything cool like that. I saw Peyton Manning live. Play the Seahawks in 2014. That was cool.

I saw him underhand a Nerf football to his two kids while watching a high school game from the running track that surrounded the football field.

Made him seem Human somehow, even with that inflated alien forehead of his. 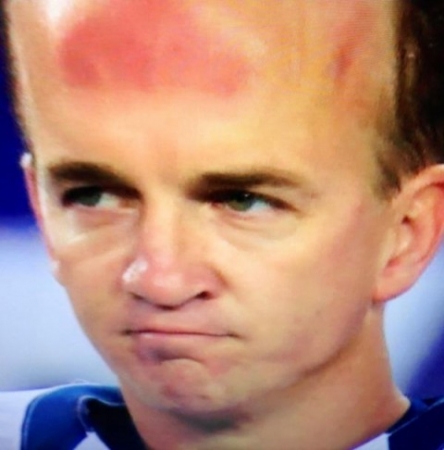 True story I used to work with a girl at my old job who has a head like Peyton. Was sad hahaha. She wasn’t a bad looking girl or anything but you could definitely cook fried eggs off her head in the summer lol. Was like a female version of Peyton.