Considering the spate of “great” stories out there like Jeff How’s there’s a 50/50 chance Josh leaves ( nothing like having a no info article) I figured it’s time for a thread.

This, by Dante is really telling about the quality OC Josh is.

Ok … but there is another thread. With MCD in the title.

I’m not a fan of chatting about coaches leaving . We have the Indy experience, but also the parcells fiasco that partially cost a SB.

In fact , the NFL should change the rules so coaches of losing teams must wait until playoffs are over… So coaches in the playoffs aren’t being jerked around by the process of job seeking for the following season. IMO… now I’ll shut up on the subject.

In fact , the NFL should change the rules so coaches of losing teams must wait until playoffs are over

I agree with this in principle, but in practice, does it really matter? Most recent anecdotal evidence on the Patriots’ side (Brian Flores) indicates that it doesn’t. He was all but out the door last year when the Patriots D turned in their best performance all season in the game where it mattered the most.

Flores becomes the nice exception to the rule…
Example in the other direction is the performance of the offense yesterday. But hopefully it’s a wake up call. Cuz if this offense posts another stinker this week, MCD can join the losers in the job search.

Flores becomes the nice exception to the rule…

I don’t agree with this.

An 80 percenter thinks “who gives a shyte what I do in these last few weeks … I’m leaving anyway.”

A 20 percenter knows “I’m walking out the door, so I will leave them a piece of work that makes them realize they should have done anything and everything to keep me around.”

Flores may just turn out to be a 20 percenter.

I don’y either, actually given the quality of teh TE/WR’s position, I think he did quite well with a one option passing game!!!

On the pick six, Sanu was open over the middle.

on the last drive Harry was open for the tie, possibly win and he almost tossed a pick at Edelman, one option mindset, the Michel pass was in the direction of Edelman too but Tom threw it between the two receivers in the area, Michel and Edelman and Rowe took it home.

“With all due respect to the question, I’m not even aware of any of that stuff at this point,” McDaniels said. “When that stuff is presented to me or discussed with me or whatever, then we’ll deal with it appropriately. But honestly, it’s pretty easy for me in terms of my formula – I’m the offensive coordinator of the Patriots. We have a lot of work to do. We can improve in a lot of areas to try to get ready for this week. It’s our biggest game of the year against certainly the best team we’ve played. This is a postseason game, so our players deserve that, our coaches deserve that, and that’s what they’re going to get from me.” 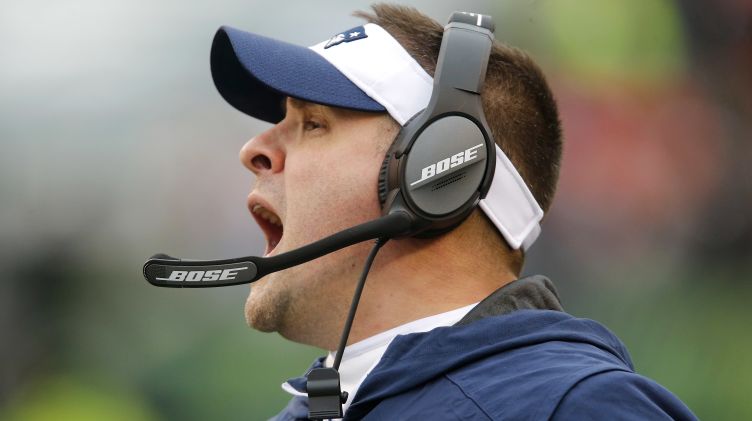 New England Patriots offensive coordinator Josh McDaniels once again is one of the most popular NFL head coaching candidates.

Yeah… good lip service there. The same could have been said the previous week but… Um…

It is a fact that the back is to the wall now. This is the important week. There are some who say the road is now impossible… signature game for MCD . Here it is.

Apparently, O’Shea is available now to assist in whatever role including potential MCD replacement…

Bring him in now…? As in… O’Shea ran the system better than mcD in last game… with Fitz at QB…!

This topic raises a serious question… what if all teams decide no-go on MCD… um it’s kinda like Brady. If these 2 guys don’t produce this week their markets go down significantly. Then what… One… more… year…

In terms of potential landing spots if JMD leaves, all the chatter here is that the Panthers owner wants a big name hire. The name most often thrown out there is Mike McCarthy.

Anyone on the current staff that goes with him? Maybe Jerod Mayo as DC?

I really hope some other team is stupid enough to hire you.

The 3rd and 1 calls in this game were as bad as any OC with no balls ever … but just confirm that you’re done here so …see ya. Good luck.

Josh called a couple of bad plays but why don’t we have a bang head emoji?

My Kingdom for a bang head emoji.

Wow… I kinda called that one… C’mon Cleveland…!