I just want one damn win over these guys. Is that seriously too much to ask for??? for Joolz, I feel bad I missed posting for a bit - no phone service all week and I refuse to take a tv camping despite having cable tv on site.

What is a Yankee?

Same as a quickie but you can do it yourself.

A Seattle Mariners fan, a Detroit Tigers fan, a Boston Red Sox fan, and a New York Yankees fan are climbing up a cliff.

They are arguing over who is most loyal to their team. It gets to the point where, when they are halfway up the cliff, the Tigers fan yells, “This is for Detroit!” He then jumps off the cliff and dies.

The three remaining climbers continue to climb until they are three-quarters of the way up the cliff. Not to be outdone by the Tigers fan, the Mariners fan yells, “This is for Seattle!” He then jumps off the cliff and dies.

Finally, the last two climbers are standing on top of the cliff. The Red Sox fan yells, “This is for Boston!” He then pushes the Yankees fan off the cliff.

What’s the difference between a Yankee stadium hotdog and a Fenway park hotdog?

You can buy a Fenway Frank in October

Bill & Hillary are on the mound of Yankees Stadium

Before one of their games. Bill picks up Hillary and heaves her towards home plate.

As the SS run over to help her up, One of their handlers screams at him, “Mr. President! You were supposed to throw the first pitch!”

They needed a good switch hitter.

Deadly running back for the Vikings

same guy, he beat his kid with a switch

I am totally sharing this in OBF’s non-political joke thread on the Planet. Love it.

I did use MikieGeo in a game thread and sadly, it didn’t work. Even Rachael stopped working in the EVOO games. Dammit! Nothing works! I blame Thep and sprocketboy for abandoning us

Wow lol!!! Yes I shouldn’t laugh. But my god. He was a bit much with that. 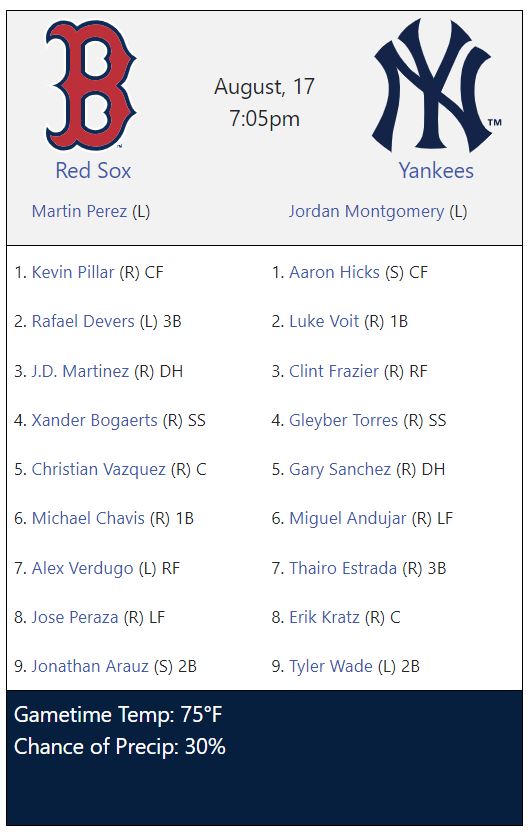 That’s a win in my books

Joolz in the house. Surprise, surprise, the Sox are losing.

Lol I know it’s a shocker.

Yay! Sox on the board.

Lmao error. Gives us a run. I’ll take it.