BOSTON (CBS) — The Celtics own a 2-0 lead over the Cavaliers, and made things look fairly easy in the first two games of the Eastern Conference finals.

But those contests were played in Boston. While the Celtics’ defense is the main reason the Cavaliers struggled inside the TD Garden, it doesn’t hurt to have 18,000+ people reminding LeBron James how much they dislike him every time he touches the ball and letting J.R. Smith know how big of a dope he is. With the series now shifting to Cleveland for Games 3 and 4, the Celtics know things are about to get a lot more difficult.

That doesn’t mean the Celtics aren’t a good road team — in fact, they’re one of the NBA’s best when it comes to invading enemy territory. Of their 55 wins during the regular season, 28 of them came away from the TD Garden (yes, they actually won one more game on the road than they did at home). It’s the most road wins in the Eastern Conference and third-most road wins in the NBA, behind only the Houston Rockets (31) and Golden State Warriors (29), who just so happen to be duking it out in the Western Conference finals.

But in the playoffs, the Celtics haven’t enjoyed that same success on hostile grounds. They dropped all three road games in the first round against the Milwaukee Bucks, forcing that series to go the distance, before breaking through and splitting their two games in Philadelphia in the East semis. Boston battled back and pulled off an impressive win in overtime in Game 3 against the 76ers, which at the moment, is their only road victory of the postseason.

The Celtics are a confident bunch who knows they have the mettle to win on the road, even as everything ramps up the deeper they get into the playoffs. C’s head coach Brad Stevens says his team understands what they need to do — it’s just a matter of execution.

“We had our moments, but we weren’t as consistent as we need to be to win more,” Stevens told reporters on Thursday. “We’re going to have to be really focused, really locked in, really consistent. It’s even harder to communicate on the road. You’ve got to be great communicating. Our coverages change up based on who’s on the floor with us and what we’re trying to accomplish. So our guys really have to be good about that, and there’s no reason to think they won’t. They’re locked in. But again, the other team is out there, too.”

The Celtics have gone up 2-0 in each of their three playoff series so far, so they understand the importance of Saturday night’s Game 3 in Cleveland. Marcus Smart said they were a bit “shell-shocked” after suffering their first loss of the playoffs in Milwaukee, but says it provided an important lesson for the team.

“We can’t afford to be surprised this time around. We understand that. We’re just trying to make it as hard as we can on those guys for them to win a game, and for us to execute whatever game plan Brad has for us,” said Smart. “We haven’t played well on the road. We understand that. We understand that other teams see that and are going to try to exploit it, but that’s the beauty about this game. Just take one game. You never know. Things change. Our confidence is high. ”

Celtics forward Jaylen Brown said getting that road win in Philly was a major boost to their confidence.

“We just needed to see one go in; sometimes you need to see one go in to feel better about yourself. We’re going to Cleveland feeling good,” said Brown, who scored 23 points in Boston’s two wins over the Cavs. “I think we’re pretty confident, just as confident as we were at home. There’s a difference being on the road and at home, just the energy disparity — at home it’s for you and away it’s against you. But if you do what you’re supposed to do and you are who you are, it will show home or away.”

The Celtics did a great job during the regular season focusing on the game on the floor and not the rowdy crowds that greeted them on the road. Brown says no matter where the Celtics play, they’re going to be the same hard-nosed team we’ve seen throughout the year.

“That’s who we are. Every day we brought our hard hats defensively,” said Brown. “Every game this season we tried to keep that same level of consistency, and I think that’s why we led the regular season in road victories.”

Smart said the key to Saturday night is making it clear early on that these Celtics won’t be rattled by a road atmosphere.

“We have to be the one to hit first. When you’re going into someone else’s house you cant allow them to get a hold of you first,” said Smart. “We have to come out and make it as hard as possible and punch them in the mouth first.”

The Celtics know they have a great opportunity to take a stranglehold of the series as this Eastern Conference battle shifts to Cleveland. If they do what they did in Philadelphia, splitting with the 76ers, they’ll have a chance to close out the series Wednesday night in Boston. If they stumble like they did in Milwaukee, that road becomes a lot more difficult.

Bovada has game 3 even.

That’s a ‘win’ for the Celtics since it means they are gaining respect.

Celtics win tonight it is over in 4, they win it is a 6 game series

[quote=“ThepAlmetToState, post:5, topic:22, full:true”]
Not working
[/quote]but It will by end of game 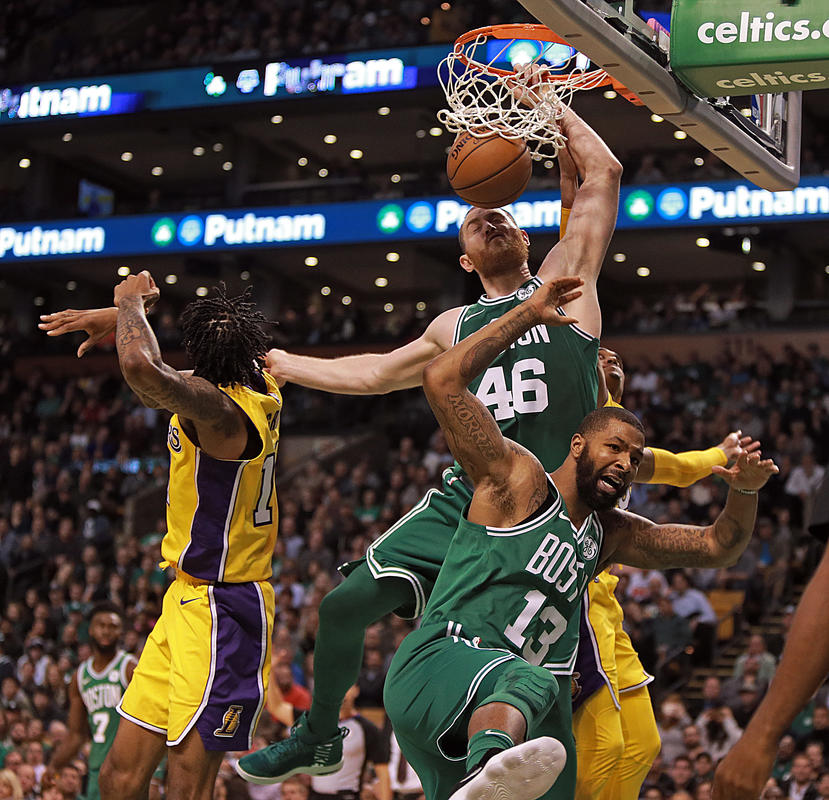 Al Horford had 0, zero, shots in the 1st quarter.

I do wonder if the darkness surrounding the court effects their shots.